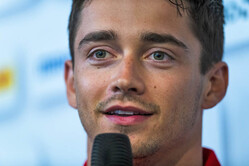 Though the option has always been there, and has been used many times in the past, in reaction to claims that over-zealous stewarding is compromising the racing, the FIA is adapting the black-and-white flag warning to serve as a 'yellow card' type warning, indicating to a driver that he is in danger of penalised and will be punished if he continues doing whatever it is he is doing.

However, while many are happy that Charles Leclerc's robust defence of his position was not rewarded with a penalty, others fear that his moves on Lewis Hamilton in the second chicane and subsequently in the Curva Grande were deserving of some form of punishment.

The revised black-and-white, 'yellow card' warning was first witnessed at Spa a week ago, when it was shown to Pierre Gasly for cutting the corner at Raidillon three times.

As the debate continues, race director, Michael Masi has defended the practice.

"We need to remember a couple of points," he told journalists. "The discussion with the drivers in Bahrain about let them race, the subsequent discussions that have been ongoing with team principals, drivers, sporting directors, then you look at it particularly in the context of Spa, where we said we are going to reintroduce the use of the bad sportsmanship flag.

"Gasly, for a very similar incident in Spa received the bad sportsmanship flag," he continued, "so in that case there was no contact and it was, if you use the analogy, it was the professional foul... it was Charles' warning.

"Was it hard racing? Yes," he admitted. "It's ultimately the stewards' decision if somebody gets penalised or the bad sportsmanship flag, but if the stewards feel there was more to it then we absolutely have the capability of issuing a penalty and that's exactly where it sits.

"I think it was hard," he continued. "The black-and-white was issued for the reason it was there. It's quite simple for me and a carbon copy of what Pierre did last weekend in Spa. It achieved its purpose.

"The black-and-white is effectively your warning. The next infraction would be referred to the stewards and in all likelihood be a time penalty. I think the black flag... and you've got to do something seriously severe to be disqualified from a race."