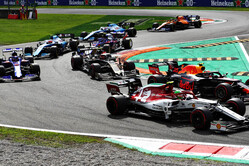 Alex Albon: "There were positives for me even though the race didn't go as planned. It isn't the easiest track for us and we had quite an unlucky weekend in the qualifying. I didn't have a great start and had to fight my way back though the field. Unfortunately, we didn't have the pace on the straights to overtake so I had to do my manoeuvres on the corners. That resulted in a lot of side by side action and at one point I just lost a bit too much grip going that wide so it started to get messy. I had a few offs and took a five second penalty. However, my race pace is getting better with the car and I feel I have made a good step up from Spa so personally speaking I am happy. Hopefully Singapore will be better for me as there will be more downforce and more corners. I think there is a lot more to come and I'm feeling more competitive."

Max Verstappen: "I got front wing damage under breaking into Turn 1 as everyone slowed up and I clipped Sergio's rear tyre. We then pitted for a new front wing and the race was still on as I had really good pace in clean air. I managed to pass quite a few cars but we got unlucky with the virtual safety car as it came out the lap after I pitted and three or four cars which I had already overtaken were back in front of me. I passed them all again but it was pretty painful on my tyres and then at the end I got stuck behind Perez for the second time in the race. I just couldn't get past him as he was so quick on the straights. We have made some steps forward with the pace of the power unit but we will of course keep working hard to improve even further. With what happened at Turn 1 coming through to eighth isn't too bad and these things are always more likely to happen when you start at the back. The last two races were always going to be difficult for us and now I'm looking forward to having a more normal race weekend and starting closer to the front."

Christian Horner: "It was a good recovery by both drivers in what turned out to be a difficult race. Alex lost a couple of places on the first lap and was fighting his way back through the field but he got run wide with Carlos Sainz which dropped him back behind a couple of cars. He started making up positions before unfortunately picking up a five second penalty whilst passing Magnussen, which he had to serve at his pit stop. Overall, it was a good recovery drive from Alex to come back up to P6. As for Max, he started the race from the back of the grid due to the engine penalty and he unfortunately incurred some front-wing damage at the first chicane. This meant he had to pit for a nose change on the opening lap, which the boys did in under 10 seconds and then the virtual safety car came out one lap later which was unlucky. Once he was in clear air, Max's pace was equal to that of the leaders and he was able to make up some good ground despite a slight issue with the rev limiter in the tow which made it very difficult for him to overtake. Nonetheless, coming from the back of the grid to P8 with an extra pit stop and with Alex in P6, we leave Europe and now look forward to the final stage of the season starting in Singapore."