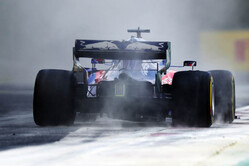 Alexander Albon: "I'm pretty satisfied with P12 after a tough FP2 after the crash. The car had the potential to reach Q3, but we were always just missing something which was a bit frustrating. Overall, I'm happy because after FP3 I was struggling as the car didn't really feel connected. We made a few changes after FP3 and in Qualifying the car felt more hooked up, so I got the rhythm back. Reaching Q3 would have been nice, but we were two tenths from getting through, the balance was good in some corners and in other places it wasn't. Track position is key around here as there isn't many places to overtake, so we'll need to think of a good strategy for tomorrow. We're near the front of the free tyre allocation and I think the degradation will be quite high here, so hopefully we'll be able to overtake some cars."

Daniil Kvyat: "Apart from a little misunderstanding with the team on the last run, when we went out with the wrong setting on the car, it was an OK Qualifying session. There wasn't that much left in the car today, maybe a tenth, so this is generally where we are at the moment. We will be able to fight from P13 tomorrow, but it's difficult to overtake here and usually the races become a bit like a train. However, the race is long so maybe there will be different strategy calls we can make which will help us. The start will be quite important, so we'll see where we are and we will try and do as good a race as possible."

Jonathan Eddolls (Chief Race Engineer): "The mechanics did a very good job last night to repair Alex's car - lucky for us the damage was less than it first looked! The weather forecast made for a potentially mixed Saturday, but in the end both sessions were dry. There was a delay to the start of FP3 because of a large oil leak on the track after the F2 race which required cleaning and left a lot of dust in Turn 4 and 5, giving very low grip conditions and even low visibility. Because of the delay we had to compress what was missing from yesterday's FP2 and normal FP3 running into 50 minutes, so it was quite a busy session. Both cars completed two short runs on Option tyre for Qualifying preparation and then several laps on higher fuel to learn about the car in race conditions, since we didn't have the opportunity in FP2. The track conditions were cooler than Friday, which suited us, and we came out of the session reasonably happy with where the car was. This performance carried into Q1 and the first runs in Q2, but as a team we couldn't quite achieve the best from the cars for the second runs of each driver. The wind had increased and so too had the track temperature, reaching 48 degrees Celsius, and this put the balance on a knife edge, making it very difficult to extract the peak performance. In fact, we couldn't improve on our first runs, even though the track was quicker, missing out on Q3 by just over a tenth and a half. Looking ahead to the race, our car typically has a better balance on Sunday and the weather is looking dry, so we will work on optimising the strategy overnight, given that we have a free tyre choice for the race start."

Toyoharu Tanabe (Honda F1 Technical Director): "Max Verstappen produced yet another exceptional performance to secure his first ever pole position in F1. Congratulations to him for that achievement, which was down to a team effort from Honda and Aston Martin Red Bull Racing. Now we will focus on carrying this performance through to tomorrow's race on a circuit where overtaking is very difficult. As for our other three cars, in 6th with Gasly and 12th and 13th places for Scuderia Toro Rosso, I believe we have a good chance of scoring points with all of them. That's our target."