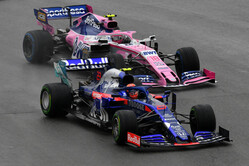 The first driver to switch to slicks when it really mattered on Sunday, Lance Stroll rues the subsequent mistake which cost him a podium.

In the wake of the safety car period that followed Nico Hulkenberg's off on lap 40, Lance Stroll, was the first driver to pit for slicks, the youngster stopping on lap 44 as the safety car was withdrawn.

In the laps that followed, as chaos ensued, the young Canadian moved further and further up the field, at one stage momentarily leading the race.

Running second behind Verstappen, on lap 51 he made a mistake and was passed by Daniil Kvyat, with Sebastian Vettel demoting the Racing Point driver to fourth just three laps from the finish.

"I made an error at Turn 8 when it was still quite damp and I was the first one on slicks," said the Canadian. "I made an error and that forced me on to the green Astro... I think it's paint on the exit kerb, which allowed Daniil to overtake me.

"Without that, I'd definitely think we would have been on the podium," he sighed, "but it's easy to say in hindsight if only that wouldn't have happened, but really happy with P4.

"It was extremely challenging and there was a bit of a gamble every time we were stopping and putting on a different compound," he admitted. "I think we pitted five times if I counted correctly and four out of the five times it was the wrong pit stop. We were on the wrong tyre and at one point I spun, I think two times in one lap on slicks, with forty laps to go, and then I pitted at the end with twenty laps to go and I was leading the race.

"I was leading for maybe one lap, maybe not quite one lap. I heard a message on the radio saying 'you are leading the race' so it might have been for a couple of corners and then I think Max overtook me."