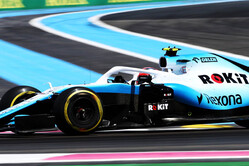 Dave Robson, Senior Race Engineer: We continued today in the way we have all season, maximising the package available to us. We executed our planned one-stop strategy well across both cars, and then managed the traffic as best we could to not minimise any damage to ourselves whilst not impeding the front runners. We had an issue on George's car after damage sustained early in the race when he hit a marker board running wide at T10. The damage unfortunately worsened to the point we needed to box him for a second time for a front wing change. Our pitstops were also good, once again reinforcing that we continue to work as racers even though we don't have the performance to compete with the rest of the field at present.

Robert Kubica: The tyres lasted better than expected so it was less painful as they behaved very well. My first lap was good, I made some correct decisions without risking too much. The rest of the race was alright, I struggled with the rear tyres in certain moments of the race, but I kept them under control, so it was ok. The battle with George was good experience for when the car gets quicker, which will hopefully pay off in the future.

George Russell: With my first attempt to overtake Robert around the outside, I ran wide and hit the polystyrene board. We thought that wasn't too much of an issue but then we found that damage to the front wing worsened. For safety reasons we decided on the change. The pace seems strong, but it was an expected day. We need to be patient, learn as much as we can and then hopefully in a number of races time start the battle. Overall, not satisfied, not disappointed just normal.