Bottas sets FP2 pace as Hamilton is under investigation 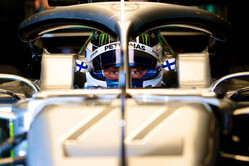 Ahead of today's second practice session the air temperature is 25.5 degrees C, while the track temperature is 53.8 degrees. It remains bright, hot and windy.

Tyre degradation was a key problems in FP1, but it is widely expected that things will improve this afternoon as there was plenty happening on track during the break in terms of the support events, unlike Canada.

Honda has an upgraded engine, as does Renault, and while the French team and Ferrari have a raft of updates on their cars it was business as usual as far as Mercedes was concerned, Lewis Hamilton and Valtteri Bottas the clear pace-setters.

While the teams have stocked up on softs, it looks like the mediums could actually be the go-too tyre, though things should become clearer as the weekend progresses.

While there were a number of spins earlier - including both Bulls, there were no significant moments, though home boy Romain Grosjean only completed 9 laps due to a water leak.

The lights go green and Kvyat is first out, the Russian, who will start the race from the pitlane following a complete change of engine, is told to go easy on his tyres.

As Grosjean and Giovinazzi head out, all three drivers have opted for different compounds.

Raikkonen heads out, like his teammate he is on the mediums.

A massive lock-up for Grosjean at T8, his engineer buries his head in his hands as the Frenchman only has two sets. Told to pit he wants to stay out insisting that the tyres will come back. They won't.

"It's a joke," complains Grosjean. Told to pit, he responds "I don't really care."

Meanwhile, of the first wave, Norris goes quickest, ahead of Raikkonen, Stroll, Kvyat and Ricciardo.

Vettel waves at a Williams, subsequently reporting that it had "parked at Turn 11".

Bottas heads out, leaving Hamilton as the only 'no show'. The Briton duly heads out and almost immediately complains that his front tyres are not balanced.

A spin for Verstappen at the chicane, as Leclerc goes quickest in S1. The youngster subsequently goes second with a 32.612. He's on the mediums.

Gasly improves to third on mediums, albeit 0.8s down on pace-setter Bottas.

While the leading three are on mediums, fourth-place Norris is on hards, as is ninth-placed Ricciardo.

"You can have one more lap if you want it," Verstappen is told. "Can we get to the prime," he replies.

A vicious wobble in the chicane for Hamilton, but he does well to hold it all together.

"OK, I need some help," says Grosjean who, like Hamilton previously, has a vicious snap in the middle of the chicane.

Forty minutes into the session, more and more driver make the switch to the red-banded rubber, first of the big guns is Bottas.

Unsurprisingly, the Finn goes quickest in the first two sectors, finally crossing the line at 30.937, only 0.424s quicker than Hamilton's previous best on the mediums.

As Giovinazzi improves to eighth, Grosjean has another lock-up.

A big moment for Hamilton who gets all out of shape in T4 and demolishes a bollard in the process. Having wrecked his own flying lap, as he rejoins the track in front of Verstappen the Red Bull driver's lap is compromised also as he has to take avoiding action.

Could we be witnessing Bottas 2.0 again this weekend?

Grosjean remains very, very unhappy with his car, though his criticism falls short of Magnussen's tirade in Canada.

Sainz complains of hearing funny noises in his car. David Croft's giggling, anyone?

"Lewis is currently out of action," Bottas is told, "so it will be useful data that you're collecting." That said, we don't know why Lewis is "out of action".

The stewards, meanwhile, are to investigate that earlier incident involving Hamilton and Verstappen.

Funny enough, we haven't seen the world champion since that incident.

Out come the yellows as Hulkenberg spins at T12.

Kvyat is one of a number of drivers who enquire about the wind and its direction at various points on the track.

Perez looks to have incurred some front wing damage as he takes a rough ride over the kerbs and run-off following a mistake.

"The front's not an issue at the moment," reports Ricciardo who has done 9 laps on his softs.

A big lock-up for Magnussen as he attempts to pass Giovinazzi heading into the chicane.

"I can hear it in your voice," responds Bottas' engineer as he complains of a vibration.

"All the tyres are gone," sighs Leclerc, who has also done 9 laps on his softs.

With seven minutes remaining, all 20 drivers are on track.

Mercedes reports that the team had detected a misfire on Hamilton's car following his earlier excursion.

Norris reports that his battery is not charging. He is told to press the "anti-overtake" button.

Bottas told that at his stop they will check the front-left brake duct for "possible debris".

Two interesting sessions, and while there are question marks in terms of the wind and the tyres - not forgetting that investigation into Hamilton - it's looking good Mercedes and particularly Bottas, while McLaren is looking good for best of the rest.