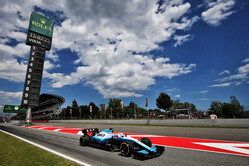 In the weeks before it was confirmed that Zandvoort is to return to the calendar in 2020, as F1 seeks to exploit the 'Max (Verstappen) factor', it was widely assumed that it would be at the expense of the Spanish Grand Prix at Barcelona.

Despite Fernando Alonso heading off for pastures new, and Carlos Sainz being the only remaining Spaniard on the 2019, organisers at the Circuit de Barcelona-Catalunya remained confident that the race would remain part of the calendar.

Now they have issued a statement calling on the government to help save the event.

"The RACC asks all administrations and the business world consensus and unity of action to achieve the renewal of Formula 1 and thus be able to maintain one of the most important sporting events held every year in the world in our country," it reads.

"The Club considers that betting on the continuity of the grand prix in Catalunya is a strategic decision at business, economic and sporting level and that for this reason the best solution must be urgently found.

"The grand prix has an economic impact on the services, automotive, tourism, transport and leisure sectors of nearly 163 million euros and generates 2,700 direct jobs. At the same time, the event is key to the circuit, one of the most important sports infrastructures in Catalunya.

"Therefore, the RACC, with more than 50 years of history in front of this competition in our country, since 1969 at the Montjuic circuit, has asked the Government of the Generalitat, the Spanish State, the rest of the administrations and the business world for collaboration, consensus, solidity and unity of action to achieve a stable agreement such that in the next few years the Circuit de Barcelona-Catalunya will continue to host F1."

With Vietnam also due to join the schedule next year, and F1 bosses insisting that the calendar will remain on 21 races, it is still not entirely clear which two events will make way for the newcomers, with Britain, Germany and Mexico also under threat.