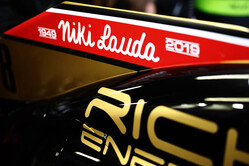 The sixth round of the 2019 FIA Formula One World Championship began with practice Thursday at Circuit de Monaco as teams prepared for Sunday's Monaco Grand Prix.

Two 90-minute sessions - FP1 and FP2 - were run in partly cloudy conditions on the 3.337-kilometer (2.074-mile), 19-turn street circuit that has remained relatively unchanged since it first saw racecars in 1929.

Rich Energy Haas F1 Team experienced telemetry and radio issues in FP1 costing valuable track time, but Kevin Magnussen and Romain Grosjean responded with solid, top-10 laps before the checkered flag. Both drivers ran exclusively on the Pirelli P Zero Red soft tire throughout the session. Magnussen posted a time of 1:13.232 on his 20th lap that was eighth-best. He completed 24 laps. Grosjean's quick time of 1:13.379 came on his 21st lap. He completed 23 laps and was the 10th-fastest driver.

Magnussen began FP2 in the afternoon on the Pirelli P Zero White hard tire before switching to the softs and concluding the session with another run on hards. His fast lap of 1:12.174 came on his 28th lap shod on softs and was 1.058 seconds better than his fast lap in FP1. He ran a session-high 54 laps. Grosjean began FP2 on mediums before transitioning to softs and finishing on mediums. His best lap of 1:12.392 came on his 18th lap, also on softs, and was a .987-of-a-second improvement over his best lap in FP1. He completed 51 laps.

Romain Grosjean: "It's been a good day. We didn't really know what to expect coming here - obviously, last year here, it wasn't our strongest race. I was open-minded to what we could get. I'm quite happy with the way the car was. We possibly didn't quite choose the right set-up for FP2, but we tried something which was interesting. Now we can analyze all the data for Saturday. I think we should be in the mix for a good qualifying."

Kevin Magnussen: "We lost a bit of running in FP1 due to a telemetry problem, but got running again, and got all our low-fuel work done. That allowed me to get a good feeling for the car. We missed out on a few high-fuel laps, but we got them in FP2, so it wasn't too bad of a Thursday. Between us we also ran on all the tire compounds today, so that's good. The car feels good in low-fuel, so we'll see what we can do for tire management. It's a tough track to overtake on, so it's not the main priority, but of course we want to be fast in race runs. So far everything's going okay, and hopefully Q3's a possibility."

Guenther Steiner: "It's been an interesting and eventful day for us. This morning we had some issues with our IT equipment and we couldn't run for a while. It was all sorted, but a lot of people read a lot more into the black flags than there actually was. We still managed to get out with about 20 minutes left in FP1. FP2 was pretty good. We ran a lot of laps, we didn't have any issues. Everything was up and running again. The car seems to be competitive. So, let's see what happens Saturday, and hopefully we can repeat our result from today and have a good qualifying - which means having a good race on Sunday."