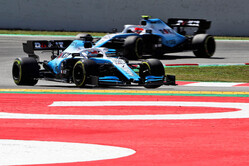 George Russell qualified 19th and Robert Kubica 20th for the Spanish Grand Prix. George continued to improve on his time with a 1:19.072 on his third and final flying lap of Q1 to finish P19. Robert set his best time of the session on his second run with a time of 1:20.254 to finish P20. George will have a five-place grid penalty for the race due to a gearbox change following damaged sustained during an accident in FP3.

Dave Robson, Senior Race Engineer: With Robert having missed his high fuel running yesterday, he was able to start FP3 early with a new set of hard tyres and experience the car in race trim. Both cars then completed a programme looking at maximising performance in qualifying in today's cooler conditions. Unfortunately, George had a spin near the end of FP3, which caused some damage to the car, and he will have to take a grid penalty as a result. The red flag also meant that Robert couldn't complete his final run in FP3.

Our two drivers had slightly different run plans in Q1, reflecting their pool of available tyres. Robert completed three runs, and George two. The variety of strategies adopted by the field in Q1 meant that traffic was always a risk, and both George and Robert had issues in Sector Three, however, in the end, both had clear final laps. Unfortunately, Robert had some oversteer in T4 and lost time as a result. George, in contrast, enjoyed a trouble-free lap and posted a very good time.

George Russell: It was a good session, considering the circumstances in FP3. Thanks to the mechanics for their hard work getting the car ready after my error in practice. However, I was really pleased with my last effort in qualifying and I felt I got the most out of the car.

Robert Kubica: I started the weekend with a positive feeling in FP1, but this disappeared session by session. We kept reducing front-wing and aero balance which should have given us some understeer, but we were still struggling with oversteer, especially on the last run when the track was getting better. The changes that we are making are not giving us the results, so it is a bit confusing.