Brazilian GP to remain at Interlagos? 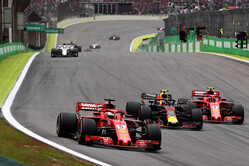 Despite claims that Brazilian Grand Prix is to move to a new purpose-built track in Rio de Janeiro, it appears the race could still remain at Interlagos.

Earlier this week, Brazil's president, Jair Bolsonaro, said that the country's 2020 round of the world championship would be held at a new purpose built track in Rio de Janeiro.

Revealing that a deal had been signed with the city's governor Wilson Witzel and mayor Marcelo Crivella, Bolsonaro said that construction would begin soon with completion before the end of the year.

"The management of F1 has decided to maintain a grand prix in Brazil, but Sao Paulo has become impractical because of the event's public financial support and the debt that exists over there," Bolsonaro told reporters.

"The new track will be built in six or seven months," he added. "The hotel sector will be happy, the state economy as well since it will be six or seven thousands jobs generation. It is good for both Rio de Janeiro and Brazil."

However, other than serious doubt as to whether the track really could be built in seven months, there was serious concern at the economics of the move, with the promoter of the event said to be paying $200m for the construction of the track in addition to a sizeable hosting fee.

Furthermore, other than fears that the track was to be built in an area notorious for crime, according to sources the nearest "decent" hotel to the proposed location is well over an hour away.

Yesterday, a number of drivers expressed dismay at losing Interlagos from the calendar, Sebastian Vettel admitting: "It's a shock.

"I think Interlagos is a great place, a lot of history," he added. "I think the old track at Interlagos is even better than the current one but I couldn't think of anything other than maybe the track being a little bit short that Interlagos is almost missing.

"I'm really looking forward to the last race we have there. Who knows, in the future, if we go back? It's a great place, so it's a real shame. I'm sort of a fan of hanging on to old things. It would be nice to go back very soon. Maybe have two races in Brazil, since the crowd is usually quite amazing."

"I think the same thing," added Valtteri Bottas. "In Sao Paulo there is obviously a lot of history in Formula One, many great races have been done there."

"I like Sao Paulo," said Carlos Sainz, "I like its track, this old school layout, the history it has from the nineties and also the famous title fight there in 2007. I think it brings great memories. I don't know, I think it depends on the track they build in Rio."

Today however, speaking at a press conference in the city, the mayor of Sao Paulo, Bruno Covas and the city's governor, Joao Doria, said that they will fight for the Grand Prix to remain at Interlagos and that F1 supremo Chase Carey is expected in the city next month to discuss the situation.

"We will not give up F1 in Sao Paulo," said Doria. "We respect the right of Rio de Janeiro, but it does not seem to economically viable, and there would also be reaction from the drivers, who know that Interlagos is one of the five best racetracks in the world.

"There is a contract, signed until 2020, with strict clauses and heavy fines if either party breaks the contract," he added.

One of the stumbling blocks moving forward is the need for renovation of the Sao Paulo circuit and its facilities, however, Doria said that this is in hand, while casting doubt on the proposed site in Rio.

"I've flown over Deodoro," said Doria of the location of the proposed track in Rio, "there is no dispute with Rio or Bolsonaro, but there's nothing in Deodoro. How can you imagine an investment, plan, execute, build, with a budget that does not exist by 2020?

"There is no aerodrome there. It's not something that can be recorded as a conclusive proposal," he insisted.

"If you want to challenge us, that's fine," he concluded. "But I can guarantee that Sao Paulo has more chances to win. Since December 2018, the prefecture of Sao Paulo has been working on renewing the contract of the Grand Prix. There is a conviction that our good relationship will prevail. We do not know of any obstacles that may prevent this renewal."