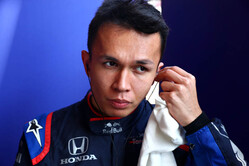 Alexander Albon: "Finishing just outside of the points isn't what I wanted. I had an OK start, I got a bit boxed in and went in the wrong gaps and at the wrong time, then I touched the wall on the exit of Turn 1 so I was a bit cautious into the next couple of corners. After that, our pace was decent but I think we stayed out too long and lost some time. We fell behind the whole pack after we pitted, and the problem is that everyone is so close in the midfield that we needed a bigger pace advantage than we had to make up some ground. At the end, I was able to make a few overtakes and I had some fun out there, that's the main thing!"

Daniil Kvyat: "It wasn't the best of days as we had to retire the car through no fault of our own, but these things happen in racing. I have no issue with Daniel, he recognised his mistake and we now turn the page. Of course, I was a bit disappointed in the moment as I thought we could have scored a point, but there's not much you can do about it. Yesterday, our car was great in Qualifying, but we struggled with some tyre management today, so we'll investigate to understand why and just move on to the next race. We have a strong package and I'm sure our time will come."

Jody Egginton (Technical Director): "Today's race has not been particularly good for us and we leave Baku feeling points were a missed opportunity. Dany's race-start tyre set dropped off unexpectedly early which forced an early stop and put him out of position. Although Dany was running in the points after his pit stop, the incident with Ricciardo meant a further time loss and an eventual retirement due to the damage sustained. Alex had a reasonable race and just fell short of scoring one point, but we have to be honest as a team and say we probably could have done a bit more to help ourselves with our pitstop strategy today. These things happen, so we will go away, review the numbers, and ensure we do not fall into a similar trap in the future. We now shift our focus to the next race, where we expect to see again a very intense battle for points in the midfield."

Franz Tost (Team Principal): "After the good pace shown in Qualifying we were in a good position and quite optimistic for the race. Unfortunately, the outcome was completely different from what we expected. Both drivers lost a position on the first lap, and very soon they both started to complain about graining. The first one to come in for his pitstop was Daniil who switched to Prime tyres. He showed a strong performance on this set and caught up to the pack to fight for 10th position until he had an incident with Ricciardo, who outbroke himself, causing both drivers to go off track. When Ricciardo tried to re-join the track, he reversed into Daniil and heavily damaged his floor, which lost around 60 points of downforce. This made it impossible for Daniil to continue and we had to retire the car. As for Alex, we pitted him too late but he was able to recover in his second stint. Nevertheless, he could only manage to finish in 11th. We have to analyse what went wrong today to come back stronger in Spain."

Toyoharu Tanabe (Honda F1 Technical Director): "Our primary aim today was to get all four of our cars to the finish with our new Spec 2 ICE, therefore it was a shame that two of them had to retire. Daniil was very unlucky to retire because of an accident that was not his fault and it's a shame that Alex finished where he started, as it is just one place outside the points. On the positive side, our Spec 2 ICE ran trouble free on its first race weekend, which is a good sign. We will now analyse all the data and work closely with our teams as we prepare for the next race, the Spanish Grand Prix."