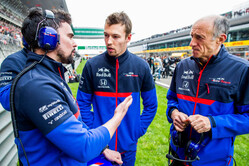 Carlos Sainz has hit out at Daniil Kvyat for his first lap impatience which effectively ruined both McLaren drivers' races on the first lap of today's Chinese Grand Prix.

As the field jostled for position in Turn 6, suffering understeer, Kvyat first hit the McLaren of Carlos Sainz before colliding with his teammate Lando Norris even harder, sending the Briton's car into the air and causing damage from which the car never fully recovered.

At the same track where the Russian's 'torpedo' tactics were first noticed, it appeared, from this latest episode of Kvyat's China sin-drome that he has learned little, the stewards subsequently hitting him with a drive-through.

"From my side it is Lap 1," said Sainz, "obviously, I understand his frustrations but anything can happen, but it is Lap 1 and there is 55 laps to go. So if you don't get the best of starts… look at your team-mate who has finished in the points starting from the pit lane.

"It is a long race and you don't have to open the steering wheel on the exit of a corner when you know you have two McLarens side-by-side," he continued. "I think he knew, he knew that we were there.

"It's a bit of a shame because of that as it is a long race here in Shanghai and you can overtake here so if you don't get the best of starts you have to be patient and get back in the points. That is exactly what Lando and I were doing but we were in a melee. It is a shame."

Kvyat, who is likely to be under the renewed scrutiny of Helmut Marko, especially as teammate Alexander Albon was able to finish in the points after starting from the pitlane, disagreed with the penalty, as did team boss Franz Tost.

"An unfortunate race with the pace I think we had today," said the Russian. "It's very unpleasant not to be able to transform the pace into anything in the last two races now. It's a cold shower for us because the potential was very deep in the points.

"Regarding the incident, I've seen it many times now and to be honest I totally disagree with the penalty," he admitted. "I will speak with the stewards behind closed doors to see what their opinion is on that.

"It was a corner exit and my car was already totally straight," he explained. "The regulations say I have to leave a cars width to the car next to me and it was three cars in one corner with one coming back on track very sharp and another sandwiched behind. Then I went in the air from the hit from behind and then I went into Norris' car. So I will speak with the stewards behind closed doors to try to find a solution.

"I haven't seen Carlos' onboard but I've seen mine and Lando's and honestly I don't see that this incident was very particular," he insisted. "This is exactly why I don't understand this."

"Daniil's had a crash on the first lap after being hit from behind which destabilised the car," said team boss Tost. "At the same time, Norris returned to the track after going wide and hit Daniil's front left-hand side of the car.

"In my opinion, Daniil couldn't do anything different," he continued, "nevertheless the stewards decided to give him a drive through penalty."