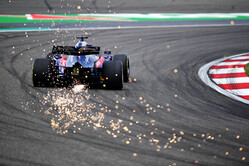 Daniil Kvyat: "It was a tight Qualifying as always, a very narrow gap separated a couple of cars, so a tenth of a second would mean two or three positions on the grid. I think I did the best I could today and the car felt quite good but we still have some room for improvement, although in general it was a very strong session. I think this was our best Qualifying of the year so far, Q3 was within two hundredths of a second, so it's just a pity to miss out by such a small margin. Based on FP2 we have a strong car for the race and a good starting position, so we'll try to do our best to finish inside the top 10."

Alexander Albon: "I had a pretty big crash in FP3 but I'm OK, I'm just more disappointed I made a mistake. Obviously, being quick in FP3 doesn't really help you that much as it's Qualifying that counts, but there are still positives to take away. I had been playing around with that AstroTurf at the last corner for a while now because it's a bit quicker using that extra bit of track. It's always a little bit loose and normally you can recover it, but this time I was a bit greedy with the throttle. I would have preferred to have spun to the left side of the track, but the car went to the right and I hit the wall. Looking on the bright side, we had a good FP2 and our race pace looks strong so I'm optimistic about tomorrow's race. It's not going to be easy, but I think we have the pace to make a few overtakes and hopefully get some more points."

Jody Egginton (Technical Director): "Both drivers were quite competitive in FP3 and overall happy with the balance of the car which was a positive sign heading into Qualifying. Unfortunately, due to the extent of the damage on Alex's car sustained when he went off towards the end of FP3, he wasn't able to participate in Qualifying. However, the guys are working flat out preparing Alex's car for tomorrow. On the other side of the garage, Qualifying was - as we have become accustomed to - a very tight battle, with Dany finishing in P11 and just missing Q3 by 0.022 seconds. It's a little bit frustrating as he had shown the Sector 3 performance good enough to make Q3 in the first run of Q2, but this is how is goes sometimes. The pace of both cars during the Friday long runs should provide us with some opportunities to have a good race tomorrow."

Toyoharu Tanabe (Honda F1 Technical Director): "Daniil is eleventh, unlucky to miss out on Q3 by two hundredths, but he has a free choice of tyres for the start and should challenge for points tomorrow. We are all relieved that Alex is fine after his FP3 crash. As a result of the accident, we are changing the PU and sending the one that was in the car at the time of the crash back to Sakura for a full check. At the moment, we do not know the full extent of the possible damage to the various PU elements. Alex can still do well tomorrow, starting from pit lane, as he showed a good pace in free practice and overtaking is possible here."