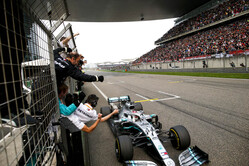 It's unclear what - if any - sort of event Chase and the gang might put on before today's race to celebrate the 1,000th round of the Formula One World Championship, after all we still break out in a cold sweat when we recall Michael Buffer at the Circuit of the Americas.

However, for a series that only came into existence in 1950, other than the three that will grace today's grid, Formula One can only produce 17 of its past champions.

Hard to believe but if those seventeen past champions were to attend today, the oldest is Jackie Stewart, who is just 8 days younger than the legendary 'former' Mott the Hoople frontman, Ian Hunter, who is 80 in June.

While Kimi Raikkonen might yearn for the danger era of the late 60s and early 70s, Stewart is one of the few survivors of what surely has to be one of the sport's darkest periods. Indeed, hard as it is to believe, it was in June 1993, that James Hunt became the first F1 world champion to die from entirely natural causes.

And while some of us hanker for those golden days, let's not forget that even in crashes like that witnessed in FP3 yesterday, the Alexander Albons of the day would have required more than a precautionary trip to the circuit's medical centre... that's assuming such a facility existed.

And let's not forget the attitude of the teams, the days when Enzo Ferrari, for example, on hearing of the death of his two-time champion Alberto Ascari while testing at Monza, simply replied... "and the car", or Colin Chapman, for example, warned about the dangerous handling of a car that "wouldn't run straight" without its wings, still sent his star driver out in it, with fatal consequences.

Though many of us look back at the 'good old days' through rose-tinted spectacles, at a time we celebrate the previous 999 races, let us never forget the men upon whose backs this sport was built.

Finally, had they chosen to ignore those 11 times the Indianapolis 500 formed part of the world championship, the 1,000th Grand Prix would have been at Monza, now that's a place that knows how to celebrate.

Back to today, and the pendulum continues to swing back and forth, and, as Toto Wolff points out, not merely between teams but between drivers.

While in pre-season testing it appeared to be - note appeared to be - advantage Ferrari, in Melbourne it was clearly advantage Mercedes. In Bahrain, Ferrari had the upper hand, until it really mattered, while this weekend the Silver Arrows once again have the edge.

Similarly, in Australia Bottas 2.0 ruled, while in the desert it was young Mr Leclerc. This weekend, on the evidence thus far, Bottas 2.0 is back in charge.

Indeed the only certainty about all this is that Red Bull and Max continue to complain, this time about the antics of others in the final stages of Q3. All of which begs the question, why did they leave it so bloody late to go out. Haas got it wrong and held its hand up, so why can't Red Bull?

As we know from experience, the Chinese Grand Prix has a reputation for throwing curve balls, witness Daniel Ricciardo's opportunistic win here twelve months ago. That said, the pendulum - boring as it is in all reality - does appear to be in Mercedes favour, and the German team is not known for shooting itself in the foot, unlike its Italian rival.

We say boring by the way, because the pendulum effect, much like during the last tyre war, can lose its shine when we know in advance that circuit A will suit team Y, and circuit B will favour team Z. Wolff says the pendulum effect produces "unpredictability" but that isn't entirely correct.

Also, with an eye on Verstappen's thinly veiled threat following Q3 yesterday, let's not forget that Romain Grosjean is also in the mix.

Indeed, that pendulum could well become an offensive weapon today as a number of drivers seek to put their teammates in their place today, the 'Noah's Ark' formation of the first five rows giving them an ideal opportunity.

Though we're blue in the face from saying it, once again, the race cannot be won on the first lap or the first couple of corners, however it can be lost... or thrown away.

Following that long, long run to T1, that first sequence of corners is a recipe for disaster, an open invitation for those of a red mist disposition.

Despite the fact that the Bahrain event featured three DRS zones, today's race should also be something of a DRS-fest.

Note: We don't say overtaking-fest because like you who recall many of those races of the 60s and 70s, DRS is not overtaking as we know it.

That said, DRS is a fact of life in terms of F1 2019, and there should be quite a bit of it. Of particular interest will be the Ferraris as they seek to make up for the advantage Mercedes clearly has in the corners. Though the Ferrari has the straights sewn up, the grid order, and timesheets, clearly demonstrate that those 16 corners (including bends and kinks) are the key.

Behind 'Noah's Ark', the midfield will be as cut throat as ever, with Kvyat, Perez and Raikkonen under threat from the McLaren pair. Stroll will be keen to make up for a poor qualifying, while Albon and Giovinazzi also have their work cut out, the Thai driver starting from the pitlane.

Hard to believe by the way, but talking of the legendary Alberto Ascari, despite Italy's great history in the sport, he remains the country's most recent world champion, and his second title was claimed in 1953... ironically under Formula 2 regulations. Sadly, Mr Giovinazzi does not look likely to emulate Ascari in winning the title any time soon.

There's a two-stopper, but this is clearly slower. It would mean starting on softs for 15 laps, then another soft stint for 15 laps, and finally hards to the finish.

Unlike yesterday and much of Friday, the sun is hidden behind lots of low cloud. The big concern however is the wind which appears even stronger than that encountered in Bahrain. The air temperature is 19.6 degrees C, while the track temperature is 29.3 degrees.

As the drivers make their way to the grid, Hamilton says "it is quite warm".

Gasly, Ricciardo, Hulkenberg, Magnussen and Grosjean are all starting on softs, as are Giovinazzi and Albon, while the rest are on mediums.

The field heads off on the warm-up lap... and Verstappen spins just a couple of corners into the lap, the Dutchman's tyres clearly not warm enough. He maintains his position, as further behind Kubica also spins.

A portent of things to come?

They're away! A good start by Bottas but an even better start for his teammate. Vettel is all over the Finn looking for a way past, and as they head into T1 looks to go around the outside but fails, and actually loses out to Leclerc who has the inside.

Behind it's the Red Bulls and Renaults side-by-side while Perez, who has made a superb start, is ahead of both Haas' by T3.

The Mexican continues his charge and by T7 is ahead of one Renault (Hulkenberg) and all over the second (Ricciardo).

Caution is the word as they all get through the first sequence of corners, but further around the lap one of the McLarens (Norris) is in the air following a clash.

Replay shows Kvyat clash first with Sainz and then barging onto Norris, almost turning the Briton on his side after initially suffering oversteer which caused him to slide into the Spaniard and then hit the second McLaren

The VSC is deployed to clear the resultant debris.

Both McLarens pit at the end of the first lap, at which point the VSC is withdrawn.

Hulkenberg is all over Perez, with the Haas pair and Raikkonen in hot pursuit.

Hamilton is worried that he has damage to his front-left after running over some debris from the Kvyat incident.

Norris is told that he has damage to his floor. Nonetheless, he is told to keep his head down and continue.

As in Bahrain, Magnussen appears to be struggling. The Dane offering no resistance as Raikkonen makes his move.

The stewards are investigating that first lap incident.