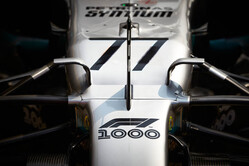 While Sebastian Vettel set the pace in that session, Valtteri Bottas led the way in FP2, with Lewis Hamilton struggling in both and left wondering "what the hell is wrong" with his car.

Antonio Giovinazzi missed FP1 due to an engine installation issue, while Daniil Kvyat was sidelined for much of the second session after Honda opted to change his engine, thereby, on this weekend of celebrations, making the Russian the first driver to require a change of Honda power unit this season.

Other than Hamilton's issues, though Ferrari has the edge, though not much of it, Mercedes and Red Bull are very much in the hunt, especially when you take into account that this event usually throws in a few surprises.

Indeed, looking at Ferrari, though the SF90 should be making the most of its power advantage in terms of the long straights here, thus far said advantage has not been that obvious, suggesting that the pendulum-like performance of the car might be swinging back to Melbourne standards as opposed to Bahrain. Certainly, while Ferrari still has the straights, Mercedes has the corners.

The midfield is as fraught as ever, with McLaren looking strong, as do Renault, Raikkonen and Toro Rosso, while Haas is looking a little off colour, not helped by a front wing failure for Grosjean, and Racing Point continues to struggle.

Magnussen is first out, followed by Giovinazzi, Kvyat and Grosjean.

The cameras pick up on Patrick Head in the Williams garage, the team's co-founder back at Grove in a consultancy role. Perhaps a step backwards, but something needs to be done to stop the rot.

Clearly in no mad rush to get to work, Hamilton runs over to the pit wall to wave to the fans in the stands opposite.

As the Ferraris head out, Ricciardo goes quickest with the third time of the day, a 35.142.

In the Red Bull garage, Gasly's car is up on its stand.

A 35.486 sees Raikkonen go fourth, as the Mercedes pair head out. Whereas the Ferraris were on softs, Bottas is on mediums as is Hamilton.

The Finn splits the Ferraris with a 33.974, teammate Hamilton posting 33.956 shortly after.

Albon goes fifth and Kvyat sixth, as Hulkenberg goes seventh, ahead of Norris and Sainz.

While Gasly completed an install lap but is now up on its stand, Verstappen has yet to make an appearance.

At which point... Gasly heads out, on mediums. The Frenchman subsequently posts 35.326 to go 11th. Elsewhere, Verstappen heads out.

Norris is told to be careful with his DRS, the Briton warned that it was "too early".

Speaking of the German however, he is out of his car which is being worked on by a number of concerned looking mechanics. Problems?

Racing Points tough start to the season continues, the work on the car suggesting a brake issue.

With 15 minutes remaining, attention turns fully to qualifying runs. The Williams pair are first out, followed by Norris.

Though he wasn't looking likely to improve on eighth, Norris gets it all wrong in the final corner and runs wide.

Meanwhile, Vettel is back on track and looking good. He goes quickest in S1, followed by a PB is S2. Like Norris he loses a heap of time following a mistake in the final corner but still improves his time (33.222).

On his next flying lap, Hamilton posts PBs in the first two sectors, finally crossing the line at 33.689 to go fourth. A scrappy lap from the world champion who is clearly still struggling having had to abort his previous lap due to a mistake.

Out come the yellows and then the red after Albon has a massive crash in the final corner.

Asked if he is OK, the Thai replies "I'm fine", which is more than can be said of the STR14.

It is a big, big crash, the youngster running wide and then losing it as he went over the Astroturf. A passenger, Albon can only wait as the car spins and careers sideways into the barrier that lines the pitlane entrance. It's nothing that a number of other drivers, including Vettel, hadn't done previously, in Albon's case he simply failed to control the car.

Though there are several minutes remaining, the session will not be re-started which is bad news for those drivers still running their qualifying sims.