Bottas edges out Vettel and Verstappen in FP2 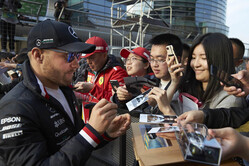 Ahead of today's second practice session, the air temperature is 19.2 degrees C, while the track temperature is 35.8 degrees. While it was bright and sunny for FP1, this session gets underway in the conditions we have become used to, dusty and smoggy with lots of low cloud.

Sebastian Vettel was the pace-setter this morning, with teammate Charles Leclerc third. Lewis Hamilton was second quickest, 0.207s off the pace, with Verstappen fourth and Bottas fifth.

However, while the Mercedes and Red Bull drivers were on the softest tyres available, the Ferrari drivers were both on medium.

In a largely uneventful session - save a spin for Stroll due to his cold tyres - Antonio Giovinazzi was the only driver who didn't post a time, the Italian sidelined by an engine installation issue.

During FP1, we noticed an anomaly in the PU data from Kvyat's car," reveals Honda in the moments before the light go green. "With only a short time to investigate the matter fully between FP1 and FP2, we have therefore decided to change the PU on his car as a precautionary measure." That's the Japanese manufacturer's first engine change of the season.

The lights do indeed go green, and Giovinazzi is first out, the Italian keen to make up for lost time. He is followed by the Haas pair.

Giovinazzi posts a precautionary 39.266 which is soon beaten by Magnussen and then Grosjean, the Frenchman posting 37.008.

A 36.848 sees Norris go top, the McLaren driver on hards, while Grosjean is on mediums. Magnussen and Giovinazzi are also on hards.

Also on hards is Vettel, who, as in FP1, is an early riser, as is teammate Leclerc. Both Ferrari drivers have new control electronics, as do the Haas duo, while the Renault runners have a new-spec MHU-K.

An early spin for Hamilton, who loses the back end in T3, while teammate Bottas also spins, albeit at T1.

Bottas splits the Ferraris with a 34.595, the Finn, like Vettel is on hards, while Leclerc is on mediums.

Hamilton posts 35.407 to go fourth, the Briton on mediums, Mercedes and Ferrari both running different strategies.

Sainz goes fifth with a 35.542 on mediums, ahead of Ricciardo, Albon, Perez, Hulkenberg and Raikkonen.

Gasly goes sixth (35.570) on the mediums, with teammate Verstappen posting 34.538 to go second moments later. The Dutchman is also on the mediums.

Hulkenberg improves to sixth with a 35.383, as, after 23 minutes, Kvyat is the only driver yet to appear.

Hulkenberg calls for a darker visor for his next run.

"You're still the only car on track, would you like another lap," Norris is asked. Indeed he does.

As attention turn to qualifying, Leclerc, Vettel and Hamilton are among the first to bolt on the red softs, this will be the first time we get to see the Ferraris on them.

Unsurprisingly, Vettel goes quickest in S1, then again in S2. At the line the German posts 33.357 to go top, 0.869s quicker than Hamilton's previous best.

"What the..." says Magnussen, though it's not clear who he is referring to.

As Raikkonen goes fifth (34.551), Grosjean is told to pit following a front wing failure, his second of the season. Debris from the failure causes a number of drivers, including Hamilton, to abort their flying laps. The Frenchman asks is it failed in T14 as he experienced a "very strange front lock", the team confirms that it did indeed happen at that particular corner.

"My tyres are completely gone," complains Leclerc, having improved to 34.158 but remains fifth.

Moments later, Hulkenberg posts 34.096 to go fourth, ahead of Sainz, Leclerc and Gasly, but is demoted when Verstappen goes third with a 33.551. The Dutchman lucky to avoid a major off in the final corner after running over a kerb.

Replay reveals that Grosjean's front wing failed as he went over a bump heading into T1.

At which point Kvyat finally heads out, though he is advised to "try DRS carefully on the back straight".

Having had his previous qualifying sim compromised, Hamilton heads out again. That said, he is on mediums not softs, and has clearly abandoned the qualifying sim for a long run.

Vettel makes clear his frustration at a slow "Force India" ahead of him, said car driven by Perez. The team says it is reporting him, but Vettel says: "No need to report him, he can do what he wants, but they race harder on Friday than they do on Sunday".

Meanwhile, there's clearly an issue with Leclerc's car, the youngster is out of it and it is up on its stand with a number of mechanics working on it.

Elsewhere, Kvyat has finally posted a serious time, the Russian 13th on 34.694.

"The brakes are pulling a bit, to the side," says Kvyat.

Can you give me some recommendations for different upshifts and downshifts," asks Verstappen. "In terms of quality or gear number," comes the reply. "Quality," says the youngster, "I already know I have 8 gears".

With 11 minutes remaining, all bar Leclerc are on track. Ferrari confirms that it is carrying out a cooling system check on the Monegasque's car in order to avoid damage.

Stroll clearly not out to make any friends, first getting in the way of Gasly and then Bottas and finally Raikkonen. Maybe Vettel had a point.

On the longer runs, Bottas appears to have the edge in terms of pace, with Hamilton and Vettel not far behind.