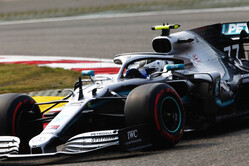 If ever there was a better example of the phrase "an accident waiting to happen" it was this morning's heavy crash involving Alexander Albon.

A number of drivers, including Lewis Hamilton and Sebastian Vettel had run wide earlier at exactly the same spot, but, as opposed to the Thai driver, they kept it together.

It was a huge crash and it came as no surprise when Toro Rosso admitted that the car could not be rebuilt in time for this afternoon's session.

Hamilton's off earlier in the session was typical of a weekend that has seen the Briton really struggling with his car, though we know from experience that he has these weekends from time to time.

He is offered hope in the form of teammate Valtteri Bottas, who topped the timesheets for the second successive session, edging out the Ferrari duo by almost 0.4s.

Thus far, while Ferrari has enjoyed domination on the straights, Mercedes is doing a better job in the corners, though it remains to be seen what happens when the various engine modes are brought into play over the next hour.

That said, the red flag that followed Albon's crash, which brought the session to an early end, meant that a number of drivers had their qualifying runs ruined.

As for the midfield, rather than trying to forecast who has the edge and who hasn't it's easier to say that Haas and Racing Point are having a torrid time of it this weekend, and look likely to face more pain over the next hour and tomorrow.

On the other hand, McLaren looks strong, as does Renault, while Gasly and Giovinazzi continue to disappoint for their teams and Toro Rosso is now down to one driver.

The lights go green and the Williams pair head out, both drivers aware that they only have another 17 minutes driving to do this afternoon.

Kubica gets things underway with a 37.421, with teammate Russell posting 36.821 moments later.

Both are on softs, as are the Ferrari pair who head out next.

Leclerc goes quickest with a 34.069, having lost time in traffic, as moments later Vettel responds with a 33.557.

Leclerc expresses his frustration at the traffic, which included a number of drivers seemingly oblivious of the needs of rivals.

With five minutes remaining, Giovinazzi has yet to post a time, and along with the Williams pair and Stroll is in the drop zone, with Raikkonen, Norris and Perez hovering. Indeed, Leclerc, in eleventh, is hardly what you'd call safe.

With just over two minutes remaining, most of the drivers begin to head out, however Giovinazzi is not one of them. Bottas, Hamilton, Verstappen, Vettel and Hulkenberg also opt not to run again.

Understandably, Leclerc goes quickest in S1, while the McLarens and Haas' look set to improve.

Kubica improves to 17th, while Kvyat goes 9th. Leclerc stops the clock at 32.712 to go second.

Norris makes it by the skin of his teeth, but not so Stroll, who fails to make it into Q2.

Giovinazzi is understood to have encountered a power unit issue, which follows his installation problem that caused him to miss all of FP1 yesterday.

We lose Stroll, Russell and Kubica, along with the hapless Giovinazzi and Albon.

The lights go green for Q2 but it is several minutes before a nose nudges out into the pitlane, it is the silver nose of Mr Bottas. He is soon joined by a number of other drivers including his teammate and the Ferraris. While the Mercedes, Ferrari and Verstappen are on mediums, the rest have opted for softs.

Perez is setting a strong pace in the Racing Point, but Bottas is also looking very good.

Leclerc goes third (32.324) ahead of Verstappen and Hamilton, the Briton0.875s off his teammate's pace.

Grosjean pits following a big moment, the Frenchman yet to post a time.

A scrappy lap for Hamilton, who, not for the first time today, runs wide in T6.

Perez told that his rears are on the "lower side" and that there is room for a quicker out-lap.

The final assault gets underway, and Bottas switches to the softs. Hamilton sticks with the mediums, while Vettel and Verstappen go soft and Leclerc also sticks with mediums.

Bottas improves in S1, while Kvyat, Raikkonen and the McLaren look set to improve.

Bottas aborts the lap in S2, while Vettel goes quickest in S1.

Raikkonen goes tenth with a 33.419, as Norris fails to make the cut after getting the final corner wrong.