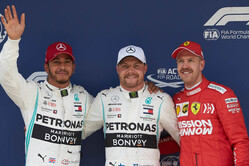 Q: Congratulations Valtteri, the 1000th championship event, the world championship leader, and you're on pole position; you worked for that one?
Valtteri Bottas: Yeah, it's been a good weekend so far, I mean, starting from the pole. I felt already really comfortable this morning in the practice. In the qualifying, honestly, I struggled a bit in Q3 to get the perfect lap in, but it was good enough.

Q: It looked like you had it covered, though. You just had an ounce of extra speed. And the lap unfolded nicely?
VB: Yeah, the lap was OK. Like I said, not completely how I wanted, but luckily it was good enough for pole and the car has been really good this weekend. And Lewis also managed to improve a lot during the qualifying; it was super close.

Q: Well, your fans seem very happy up there. Lewis: 59th front-row lockout for the team and second place for you today, though. Valtteri certainly showed some speed, but you didn't give up on it.
Lewis Hamilton: No, I didn't give up. I kept pushing right to the end. Big congratulations to Valtteri, he's been stellar all weekend. I've been struggling and fighting the car all weekend. We've been chipping away at it and I'm much, much happier. You know, it was eight tenths at once stage, the gap between us, so to be as close as we are at the end is fantastic. This is an incredible result for the team. There was a little bit more time left on the table there, but that's cool, I'll try and get it tomorrow.

Q: So, race pace - you've got the Ferraris in your mirrors, are you comfortable for the race?
LH: Well, they're particularly quick in the straights but it's evident this weekend that we've been able to pull some performance from the corners so just great work from the guys at the factory analyzing the test and the last two races, so this is really, really positive for us, really happy.

Q: Well done. Sebastian, take us through the lap. Mercedes just had a little bit too much for the Ferrari team today?
Sebastian Vettel: Yeah, unfortunately it seems to be like that. I think right from Q1 they just seemed to start off from a better place. I think we had a good session. Maybe there was a tiny bit more but I actually was quite happy that I managed the final attempt, because I was quite marginal with time, the team told me that we only had 10 seconds margin. So I then hurried up and made sure I crossed the line in time. I think there was maybe a little bit more, but overall not enough to beat these guys today.

Q: So, satisfied with third, but you've got a very fast car in a straight line and you're sitting pretty for the race?
SV: Yeah, but they are bloody quick in the corners! So you choose! For us, obviously when we get close I think we have an advantage in a straight line so maybe we can do something there. But the race is long and we'll take it from there, but it should be a good day tomorrow.

Q: Valtteri, congratulations, you've been quick all weekend. How were those laps in Q3, both of them good enough for pole position?
VB: Yeah, the weekend so far has been very good. Obviously tomorrow is the big day but at least on single lap it's been competitive and as a team we've been super strong. I think in the Q3, honestly, during those two runs I never got the perfect lap, there was always something, but that's how it goes. The pace was good, so yeah, it was enough for pole.

Q: The one-lap pace is clearly very good, but what's the long-run pace like?
VB: That's something we will honestly find out tomorrow but looking from Friday it's been pretty close among the top three teams, so there are many question marks but today is encouraging and we'll go for it.

Q: Well done Valtteri, good luck tomorrow. Lewis, you said a moment ago that you've been fighting the car this weekend but you seemed to make good gains with it during that qualifying session. Where have you improved it?
LH: The car hasn't improved from... you can't change it in qualifying so it was just really... As I said I was struggling with the car throughout the weekend, all day yesterday and even today, even into Q2. But I made a couple of changes to the settings on the wheel and some changes to the line and I managed to bridge the gap. Honestly, I'm quite proud of the job we've done considering how far away I was earlier on in the sessions and Valtteri has been quick all weekend, so he deserved the pole.

Q: And what are your thoughts on the gap to Ferrari this weekend?
LH: I don't even know what it is, so...

Q: Well, given that you were behind them in Bahrain two weeks ago, the pendulum has swung the other way here.
LH: Yeah, I think that's how it's going to be from race to race. Some cars suit some tracks better than others.

Q: Sebastian, first of all your thoughts on the gap to Mercedes.
SV: Too big. We'd like it to be the other way around, obviously. I think we had a decent session. Obviously important if we can't beat them to be right behind them, buying us some options tomorrow, hopefully.

Q: Talk to us a little bit more about that session. How was it for you? How did the track conditions improve?
SV: The track, I think, ramped up. I think you can see the lap times, from where we started in Q1 to Q3. Obviously there's a bit in yourself, a bit in the engine modes and stuff what people are doing but I think that's fairly normal. On our side we were able to improve the car from where it was yesterday, so I'm reasonably happy with that, but not entirely happy. I think there was a little bit more. It was a bit tricky today to put the laps together.

Q: (Christian Menath - motorsport-magazin.com) Queston for you Seb. There was quite a busy out-lap in Q3, the last one, think you overtook several cars; Max wasn't happy because he didn't make his lap. Think the other Red Bull didn't, both Haas. Can you talk us through that - and is it a general problem in F1 now?
SV: No, I don't think... I guess everyone timed it around the same, so we all left for the same spot. And if you're at the end of the train, which I was, then it was quite difficult. And when the team told me we only have ten seconds margin to cross the line in time to make another attempt. I had to think of something. I do not know if others were not told. If everyone would have sped up the way I did, then yeah, we would have all made it. But I obviously prioritised to make the lap. It felt like others were not aware.

Q: (David Coath - Motorlat.com) A question for each of you. It is the 1000th grand prix and we know it's another race for you. Can you enjoy the moment or is it something you'll have to look back on more further years down the line?
LH: For me it's not really much of a moment. It's just another race. We're here to win. It's great for the sport.

Valtteri, your thoughts?
VB: Yeah, here to focus on myself, our team's job and try to do the best job we can. In the end it's only numbers but obviously it's a big one, so congrats to F1.

Sebastian?
SV: Well, it's not up to us, obviously. It's a bit more colourful than other races but I think inside the car and for the result itself, it makes no difference.

Q: (Lawrence Edmondson - ESPN) Question for Seb. You said you weren't very confident with the car in Australia, it seemed to be the same again in Bahrain. Has that changed coming here? Have you started to get what you want? And, if you're not, how much more is there to get out of this car?
SV: I think we have a strong platform to work from. Obviously we started very well in Barcelona and the feeling was really good, and really strong. Since then, I think we've struggled a little bit to repeat that, so yeah, the past two races, we've had little issues here and there. Bahrain didn't go my way. Saturday was not bad, we had a small problem, otherwise I could have been better, Sunday yeah, struggling in the first stint as much as in Australia the second stint. Here and there not happy. Obviously you try to drive around the problems and try to set up the car differently. I think we are getting more and more there, understanding maybe some things related to different tracks, which Barcelona doesn't show because it's different but, as I said, the car is strong, so it's up to us to extract the performance.

Q: (Phil Duncan - PA) Seb, Bernie Ecclestone was speaking earlier this week suggesting that it could take into consideration that you might want to retire. Do you envisage being in the sport beyond your next contract?
LH: It's the moustache!

SV: He's got one too now, I don't know what you call it when it's all around. Goatee. Well, certainly I'm not going to drive... I'm not going to be in Formula One as long as he was, that's for sure. Yeah, but I hope I'm going to be as fit and as sharp as he is today when I'm hopefully that old. Yeah, I don't know, to be honest. At the moment I feel on top of my game, I feel that I know what I'm doing and yeah, I'm very very self-critical, very ambitious and I put a lot of expectation on to myself. I love driving, I love the sensation of the speed, I love fighting with these guys so there's a lot of things that at the moment I really like and I'll miss so that's why it's not an option to quit tomorrow, I'm quite happy to race. And then, yeah, I've got the contract but that's a piece of paper and then we see what happens.