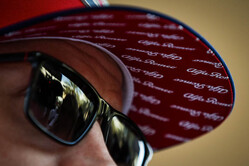 As the sport celebrates its 1,000th event, it is the perfect time to reflect on the previous 69 years.

At today's official press conference, the drivers were asked, if they had access to a time machine, which era would they like to go back to and compete.

Kimi Raikkonen, had no hesitation in replying.

"The seventies, sixties, late sixties," said the Finn, arguably the most dangerous era in the entire history of the sport, when, between mid-1967 and 1978, 16 drivers were lost, either in races, practice sessions or tests, not to mention those, such as Jim Clark, who were killed participating in other formulae.

"For sure, that would be more fun, more relaxed, more pure racing but obviously much more dangerous but that was normal at that time." continued the Finn, who earlier, when the drivers were asked about their helmet liveries to mark this weekend's landmark event, said that he'd asked to use an open helmet (not full face) but was refused permission due to "regulation issues".

"I think that 1960s, 70s, those times were good fun," agreed Sergio Perez. "The driving looked very dangerous of course; for the driver, it depended on the risk you took that maybe made the difference. I think it's something that all my career I have missed.

"Always the difference is made by the cars and not so much by the drivers. I think back then it was good fun. It looked really good. Also the atmosphere was really relaxed. I think these days Formula One is too posed. I wish it was a bit more relaxed and people enjoying themselves more."

"I'm really in love with '93, '94 and then 2005 and 2006," revealed Romain Grosjean. "I wish that Kimi was back then: yeah, you were racing. I love the cars around that time and they looked amazing and there was a tyre war as well which was quite fun to watch from outside, I thought, and refuelling and the cars looked really, really cool in mid-2000. I drove a 2007 car, it was quite good then."

On course to beat Rubens Barrichello's record in terms of most Grands Prix contested, when asked how he motivates himself, the Finn, replied: "I don't have any special thing that I try to motivate myself. It's become more of a hobby for me, maybe more than anything else. And probably that's why it's fun again.

"I always try to do the best that I can,' he added. "Some days it goes a bit better than others. But that's how it goes. Motivation has never really been an issue."