Hakkinen to contest Suzuka 10 Hour race in a McLaren 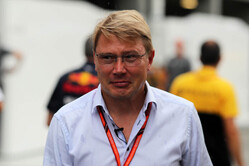 Mika Hakkinen will return to the Suzuka later this year at the wheel of a McLaren, 20 years after claiming his second Formula 1 world championship title with the brand.

Hakkinen won consecutive F1 titles with McLaren in 1998 and 1999, securing both championships with wins at the Suzuka circuit. The 'Flying Finn' was reunited with his championship-winning MP4/13 car last year, driving several demonstration laps of the Japanese Grand Prix venue to commemorate the 20th anniversary of his first title success.

Hakkinen will make his debut start at the Suzuka 10 Hour alongside two-time Super Formula champion Hiroaki Ishiura and Japanese Formula 3 racer Katsuaki Kubota. The trio will drive the new 720S GT3 for the fourth round of the Intercontinental GT Challenge Powered by Pirelli on 23-25 August. Further information on the entry, including details of the customer team that will be running the car, will be confirmed in the coming weeks.

The 2019 season marks the debut competitive season for the 720S GT3, which is now racing with customer teams in championships globally following an intensive development programme. The car has already enjoyed a strong start to its competitive career, securing pole position and victory during the debut customer race event in Melbourne.