Alonso: 2019 McLaren a "step forward in every aspect" 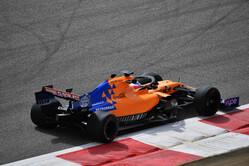 Despite his track-time being seriously compromised by the weather, Fernando Alonso has paid tribute to McLaren in terms of the progress it has made with its 2019 contender compared to its predecessor.

On tyre testing duty for Pirelli, the Spaniard completed 64 laps in the MCL34 - the third highest mileage of the day – as he posted a best time 2.8s off Max Verstappen's pace.

"It's a step forward in every aspect," he said. "The car has more grip, is less draggy on the straights, the engine is a big step better as well. Overall, as a package, the car is on the right direction.

"We saw in the first two races that there's still another step to do if you want to compete with the top three teams," he continued. But as a first step, hopefully they can consolidate as the fourth team or lead the midfield together with Haas. That's the target and I felt that in the car as well."

The second day of the Bahrain test sees him in the second car in the afternoon only, countryman Carlos Sainz driving the MCL34 in the morning.

"We've been working a lot for four or five years in the team," reflected Alonso, "and we never had probably the momentum or never had the continuity on the progress. We had some good starts, some good moments, but never the continuation through the year.

"So, this year, there is a good baseline and a good programme of development," he said. "It's going to be a much better season."

Alonso said last year that McLaren did not improve its car after the Spanish Grand Prix and in Bahrain admitted it was "painful" to suffer that during his final season."

Asked about a return to F1, he said: "If one day I come back to F1, which I doubt because my plan is firmly to stop F1, it is if I can win a world championship.

"That possibility is tempting for any driver," he added. "But to finish seventh, sixth or even fourth, it's not tempting."

Check out our Wednesday gallery from Bahrain, here.