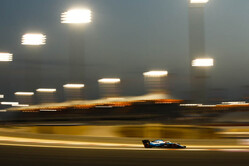 George Russell qualified 19th and Robert Kubica 20th for the Bahrain Grand Prix. George improved on his second flying lap to a 1:31.759 finishing the session in P19. Robert set a time of 1:31.799 on his first flying lap but was unable to better his time, finishing P20.

Dave Robson, Senior Race Engineer: Unusually for this time of the year in Bahrain we had quite a lot of overnight rain which made FP3 even more difficult than we thought it would be. It was very hot, similar to FP1 on Friday, but we were able to undertake a few tests in these relatively poor track conditions which were quite positive. Moving onto qualifying we were able to use the work we did in FP2 yesterday in order to set the car up for the session this evening. The two drivers drove well and although the car is still a little way of the pace they are pushing as best they can, with the two cars setting very similar laptimes.

George Russell: It was a very difficult session, for whatever reason the car wasn't handling anywhere near as great as it was yesterday in FP2. My laps were really messy and far from the potential of the car, which is a shame. We know we are not fighting in the mid-pack but we still need to optimise what we have, and today we didn't do that.

Robert Kubica: It was a reasonable session. It is a difficult situation and we have a few things to check as again, we could have bettered some things. For sure, the lost camera from the nose on the last flying lap didn't help but it would have only changed one position. It is currently more about understanding the things we need to do in order to improve, and to be ready when the car improves so in the future we can extract the maximum from it.