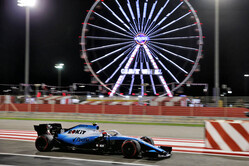 Dave Robson, Senior Race Engineer: It is the second race of the season and we have very different conditions here to those in Melbourne. It was extremely hot and windy in FP1 which made life very difficult for all the cars as well as making learning tricky. We were able to get through some interesting tests based on some of the investigations we did back in the factory after Melbourne. Moving into FP2 it was much cooler, and the wind had calmed down, so we were able to knuckle down and get onto the real preparation ahead of qualifying and the race. We have run some useful tests, with the two cars running slightly different programmes in terms of car setup as we continue to learn how to get the best out of the FW42. On George's car we had our first proper run on the C1 compound, which is Pirelli's hardest tyre and the prime here. All in all, it was a tricky Friday, but we were able to learn more about the car and complete some good preparation. We must now hold our nerve as we know FP3 will be hot and difficult, and make sure we make the most of what we learned in FP2, so we can apply that for qualifying and the race.

George Russell: I enjoy driving in Bahrain it's a really nice track with a good flow to it. I think we are very slightly closer, as the circuit generally suits the team more than others, but we are where we expected. FP1 was quite a challenge, however I think everybody was struggling out there in the hot conditions. FP2 was much nicer to drive but the laptimes are still a long way off and we have a lot of work to do. Whilst we are in this position we need to use it to optimise everything else so when the car does become competitive we are ready to pounce.

Robert Kubica: It wasn't an easy day, but we know what we need to work on. After the first race I had some doubts and questions, but those have now gone. In Australia, I ran a different set-up to George and we could clearly see the different characteristics of the car, here we started with the same set-up and the characteristics are still different. I just hope we are able to solve it, but we have some tests to do so we understand the reasons.