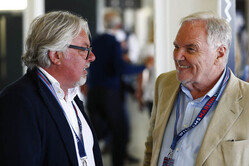 With Williams staring into the abyss in terms of a second disastrous season, possibly even worse that 2018, the Grove outfit has sought the help of its co-founder Sir Patrick Head.

Amidst speculation in the Bahrain paddock, the team issued a brief statement: “We can confirm that Sir Patrick Head is currently offering some support to our engineering team on a short-term consultancy basis.”

The news comes at a time the legendary team appears to be in freefall, its technical boss, Paddy Lowe on leave of absence, and a number of other senior figures having left the team in the last year including chief designer Ed Wood, head of aero Dirk de Beer and finally Rob Smedley.

In 1977, while Head settled down to design what would essentially be the first proper Williams car, Frank Williams ran paying drivers in a second-hand March 761. Then he pulled off a coup, by landing substantial sponsorship from Saudi Arabia. In typical Williams fashion, he had a car painted appropriately, trailed it to London and parked it outside the hotel where he was making his pitch. He had no need to speak in abstract terms, the car was outside the front door.

The rest is history, just two years after the FW06 took to the track, the FW07 took Alan Jones to the title, Clay Regazzoni having claimed the team's maiden win a year earlier in France.

Though he stepped down in 2011, Head remains a significant shareholder in Williams and the state of the current team will pain him greatly.

In the midst of a situation which sees the cars several seconds off the pace, the drivers compromised by a lack of spare parts and a fundamental issue with the car that will take months to resolve, the authoritative, booming voice of Sir Patrick is exactly what the team needs.