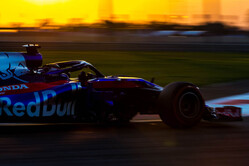 Pierre Gasly: "It was a positive Friday for us as I finished P11 in both sessions. The first feeling with the car is pretty good, but we need to put everything together because we are still lacking some performance to make it inside the top 10. It makes it a great challenge ahead of tomorrow, so we need to work hard tonight to find the best compromise to get our best performance for Qualifying and have a good race on Sunday."

Brendon Hartley: "Overall it was a positive start to the weekend, a pretty good day for us! We've put a lot of focus on the long run high fuel tyre-life, which is an area we struggled with at the last race. I didn't really have a clean low fuel run on the Hypersoft and I had a little issue with the car, but the real positive was the high fuel running. The race pace looked really strong for us and we'll keep working overnight."

Jonathan Eddolls (Chief Race Engineer): "After the last event, where we qualified well and our race pace wasn't as expected, we put in a lot of effort into understanding our delta pace between short and long runs. The majority of the work today was to understand that further, based on the analysis from last week in order to gear the car up for race pace, but at the same time not compromise the short run pace. We were quite aggressive with our tyre choice here and we've predominately run on Hypersofts, with both cars running two Hypersofts in FP1. Brendon had a fairly productive session where we confirmed much of our analysis. Unfortunately for Pierre, he had an issue with the gearbox on his final run. We understood what the problem was, but to ensure there was no risk in FP2 we elected to change the gearbox. FP2 is probably one of the most important sessions of the weekend because it's the only session prior to Qualifying and the Race where track conditions are relevant. The focus was then on trying to optimise the car over the short run but with the car setup for a high fuel run. The car is working well for Pierre, but Brendon didn't quite get the lap together, so there's definitely more to come from his side of the garage. The competitiveness over the short run is looking where we expect, and over the long runs I think it's fair to say that it's improved compared to recent events. We still need to complete a more detailed analysis tonight to make sure that is the case. The big issue that all teams are facing is the graining on the Hypersoft, it's a particularly weak tyre on high fuel and it looks like there's not much that can be done to manage it. This will make a big difference in the race between the drivers starting in P10 and P11 - the tyres will make for an interesting race for those at the tail end of the top 10."

Toyoharu Tanabe (Honda F1 Technical Director): "On the PU front, we had a trouble-free day and night, in the first two sessions of the final race of the season. The team opted to change the gearbox on Gasly's car after the first session, following the incident in FP1, but fortunately this did not affect the PU in any way."