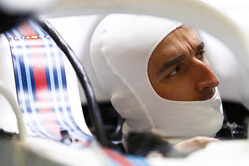 It was reported yesterday that Robert Kubica is "in the frame" for the seat alongside George Russell at Williams next season, indeed it was claimed he has a "race drive on offer".

“I think we are quite close to the decision,” the Pole told Motorsport.com. "From my point of view I'm getting there, and I have a deadline very soon, in my head let's say.

"It will be within a few days, what I decide, what I want to do," he added, "and what I think is the best direction for me. I'm in a comfortable situation, and this is what I've been saying for a few weeks. I will be doing something which in one way or another attracts me, and gives me the confidence that I will be doing something that I enjoy. But for sure a lot depends on making my mind up on what direction I want to go, if I want to race, and where to race, if I can combine things, and if I can focus only on one thing, as I did this year. As I said, I have my deadline, which I will respect, which is in the next few days. Then we will see."

The Pole's determination to return to the sport following his almost fatal rallying crash in 2011 is the stuff of legend, and his disappointment on missing out on the seat at Williams this year was only matched by the disappointment of his many fans and admirers.

However, muddying the waters is talk of the Pole joining Ferrari as a development driver, the Italian team having lost Daniil Kvyat to Toro Rosso and Antonio Giovinazzi to Sauber.

Ferrari places much emphasis on its development drivers whose simulator work over Grand Prix weekends is known to have turned the team's fortunes around on a number of occasions over the last few years.

However, Ferrari being Ferrari, it is unlikely that a development role - no matter how significant - will lead to a full race seat with the Maranello outfit, somewhat ironic when you consider that he had agreed a deal to race for the Maranello outfit in 2012 prior to his 2011 rally crash.

While a decent performance for Ferrari might lead to a placement at Haas or Sauber, this could be a couple of years away and the Pole is already 33.

Then, we are told, he is "in the frame" at Williams, however, as we know from experience that is no guarantee.

Indeed, our sources claim that the loss of potential sponsor Rich Energy to Haas was a far bigger blow to the Grove outfit than many realised, with the team going to extraordinary efforts (and cost) to secure the deal. Indeed, we understand that a 2 am call to reveal the Haas decision left team boss Claire Williams in tears.

Consequently, it would appear that the Grove outfit needs a driver who can bring a substantial amount of money to the team, and Kubica simply doesn't have it.

A job-share - what with Williams being powered by Mercedes - is totally out of the question, therefore the Ferrari development role appears to be Kubica's only genuine prospect.

Whether he genuinely believes the Williams seat is a real prospect - knowing something the rest of us don't - Kubica admits that when it comes to priorities he remains undecided, though he understandably appears to favour the prospect of a short-term racing position than a longer-term 'back office' role with Ferrari.

"Maybe the wish of driving and coming back to F1 is bigger than the wish of a long project," he says. "I leave a lot to personal conclusions. But the final conclusion is my one, and I will make it.

"When I'm saying I want to make my mind up, it's also about what I want to do with my future," he adds. "Definitely I'm not looking only for the next three months, or one year, but what's is my feeling. Not everything depends on my feeling, it's not because once I decide everybody is waiting with open arms, there are also things to look at and see how it can work. I have a long flight back from Brazil, it's good to have last thoughts, and then we'll see."

Nonetheless, the Pole admits that a job with Ferrari would appeal.

"I said always when you are a small child you dream about F1, then you once you are established as an F1 driver there are two things, either you win championships, or you drive in the red car. I was quite close to doing it, it didn't work out.