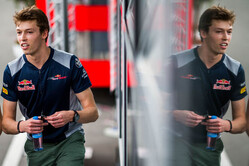 If any driver can claim to have had a roller-coaster F1 career it is Daniil Kvyat.

Scoring points on his debut (Australia), the Russian thereby became the youngest point scorer in the sport's history, going on to finish ahead of Daniel Ricciardo - who had effectively 'seen off' Vettel a year earlier - in the championship.

Finishing the season seventh, he was retained by Red Bull for 2016 but dropped after just five races. Though he scored a convincing podium in China - subsequently dismissing Vettel's infamous "torpedo" claim as "that's racing" - the Russian was involved in too many incidents, not least hitting Vettel twice at the start of the Russian Grand Prix.

Switched back to Toro Rosso, Kvyat's mood wasn't helped when his replacement at Red Bull, a certain Max Verstappen, won on his debut with the Austrian team, and over the months that followed the Russian clearly struggled.

Retained at Toro Rosso for 2017, Kvyat's was a season of highs and lows and lots of frustration. Eventually the youngster was dropped in favour of Pierre Gasly, then brought back for a one-off appearance (United States) as the Frenchman had commitments in Japan.

Now, back at Toro Rosso for the third time, having spent a season as test and simulator driver with Ferrari, Helmut Marko explained why Kvyat has been welcomed back to the fold.

"He was working with a different team," he continued, "so he saw the whole atmosphere, working programme and he also found out how difficult it is to get a Formula 1 seat.

"We stayed in contact over the whole time," he revealed. "He was well informed what Ricciardo was going to do. He knew it before most of the people knew it.

"We are giving him a third chance because we always believed he was very fast. His mental problems, I think he has solved. As I said, he is a far more mature driver and I'm sure we will see some very positive races from him. I'm sure we'll see the real Kvyat again..."