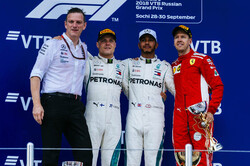 Q: Lewis, a pretty solid day at the office again for a Sunday afternoon, a 50-point lead in the championship now over Sebastian. But you can kind of feel a little bit emotional for Valtteri, obviously you switched positions, but you win and lose as a team and I guess that's what you look at today?
Lewis Hamilton: Yeah, it's actually quite a difficult day. Valtteri did a fantastic job all weekend and he was a real gentleman to let me by. Obviously he's not fighting for the championship, whereas we are. It's just been such a great weekend for the team. The team have done such an exceptional job to have this advantage on Ferrari and to have a one-two. Usually you would be just elated, but I can understand how difficult it is for Valtteri but really he did a fantastic job today and he deserved to win. But championship-wise, as a team we are trying to win both championships and I think today it was a real team effort. Whilst it doesn't feel spectacular, I know he is going to do great in the following races to come.

Q: Yeah, it takes a special human being to go and congratulate him first and I could see yesterday how happy you were when you got on pole position. but to turn the attention to the battle with Sebastian, obviously down into Turn 2. How did you feel it was? The stewards looked at it and said it was OK, but you got the job done very soon after that and then that's what made your race wasn't it?
LH: It was. Ultimately, for me, he did move over to the inside and then he moved again and nearly put me in the wall. I thought that was a double move. I guess they didn't see that. Nevertheless, fortunately I was able to stay out of the wall and still get round the corner, and then it was a question of who was going to brake earlier in the next corner and I wanted it more at the time. We shouldn't have even been in that position. I don't really understand how we strategically ended up in that place but obviously the overcut or undercut or whatever it is I did... but anyway, ultimately, we're really grateful to be here in Russia. The weather has been fantastic; the crowd has been amazing. The team here and back home, whilst it's difficult, as I said, hopefully they're proud of what they've built and the results that we have been able to achieve with their car.

Q: Not too long to wait until you go to Japan and take the fight. Valtteri, I'm not really sure what to say to you. You qualified on pole, you were dominating the race, but from a team's point of view a second place is still great and you can everyone is still giving you a round of applause, especially this man standing next to you as well.
Valtteri Bottas: Yeah, difficult day. Obviously a good result for us as a team; we got maximum points. But personally, as everyone saw, it was quite a difficult race.

Q: Is it something you discuss beforehand in the fight for the team to get on top of Sebastian? Is this something you are going to have support Lewis on going forward?
VB: For sure, we always go through all the scenarios, all the facts. Lewis is now fighting for the championship and we are fighting for the Constructors', so we always have a plan, but yeah today is... it's always difficult to predict what's going to happen in the race, how it is going to go, but it is what it is.

Q: Keep your head up man. From everyone that sees from the outside you did an outstanding job. Sebastian, you didn't have an answer to Mercedes today, but the team did a very good reaction and strategy and you managed to get in front of Lewis and he very quickly retook the position.
Sebastian Vettel: Yeah, well it was tricky, obviously you saw they worked very good together and at the start I had nowhere to go, no tow. Then I think we surprised them with a very good out lap and managed to jump Lewis but at the same time Valtteri was backing off a bit, and then I was struggling in the last sector, so Lewis was close and then had a run into Turn 2. I managed to cover and then I didn't see him through the left-hander, I wasn't really sure where he was. I saw that he was somewhere on the outside but then I think you also need to be at some stage fair enough and give room, even if I didn't want to, but I had to, to make sure that it remains fair, tough or hard but fair, but then he obviously got past. Then, yeah, I think everybody more or less the same pace. I think we were better with the tyres but probably not better in terms of pace. I tried my best then to put pressure on Valtteri but, yeah, I couldn't get close enough.

Q: Do you think it was the mistake down at Turn 13 that allowed Lewis to get a run on you later in the lap?
SV: Yeah, as I said, obviously Valtteri, as soon as he saw that I was behind, he backed off and I lost like 1.5 seconds to make me run into him, which I didn't mind initially because I thought I could sneak DRS. But I had a tiny lock-up there and then, as I said, the last two corners were in particular difficult, so Lewis was close and he was on really new tyres, mine were just a lap old but not new. Anyway, it was a good race. I think we were closer today but obviously not the result we wanted.

Q: (Scott Mitchell - Autosport) To the two Mercedes drivers, the way you were able to build a small gap over Sebastian towards the end of the race, did you think you were going to be able to swap positions back or did it feel pretty set in your minds?
LH: Honestly, when I got the call that they had said that to Valtteri, I don't know if you heard me but I said "just tell him to speed up." They told me on the radio that they've... "Valtteri is going to let you go," which is not what I wanted, and I said: "just tell him to speed up," because I had Sebastian on my tail, getting quite close. So, yeah, naturally passing him did not feel good in that instant in Turn 13, and I didn't know what was planned for the end. I was waiting to get some news or something like that but I knew that the team wanted it to end that way. If they had made that call, that confirmed to me they wanted it to end that way. But honestly, it's very, very hard to find the right words. It's very strange feeling. We've had a 1-2, we've dominated as a team this weekend, the team has done an incredible job and it's obviously never, ever in my whole life been the way I've wanted to win a race. I just want to shine it on to Valtteri. There are not many team-mates who would do something like that.

Valtteri, when that call was made did you know it was like that until the end of the race, at the time?
VB: yeah, I could expect that. Because obviously, Lewis is fighting for the Drivers' Championship, and I'm not. And the way we finished, compared to the beginning, makes no difference to the Constructors' points. So, yeah, I was expecting that.

Q: (Luis Vasconcelos - Formula Press) Two questions, first for the two Mercedes drivers: you had much fresher tyres than Verstappen but none of you could close the gap enough to try to pass - although Lewis had a bit of a go. Why was that? Is it the nature of the track? And also, for Valtteri, we had the unusual situation of having James Vowles going on the radio to explain to you what they had done. And Toto as well. Does this mean that the scenario that panned out was not one that was properly discussed before the race - or was it discussed and they were just trying to justify themselves?
LH: It's a really beautiful place here in Sochi but the track honestly... on a single lap, when you're on your own it's cool - but it's not very good at all for racing. You've got the really long straight but the characteristics of the circuit mean the first two sectors are quite fast and the last one, the last sector, the rear tyres are so hot, it's impossible to follow another car, so you can't even get close to have a run. I did ask Charlie if he could bring the DRS even earlier, because that maybe would encourage overtaking. You need to be 1.4s faster than the car in front of you - and when you're racing with someone you're not 1.4s faster than him - to overtake. I was just saying in the changing room just now, they should do it in reverse. Go backwards. Go the other way around the track, so you have the slow section first and then the fast sections, maybe... I don't know if it'll make a difference. But otherwise they've got to change the track to make it more racing-like. There are circuits that have which have a much smaller delta to overtake. Was there a lot of overtaking in this race?

The Red Bulls coming through early on did some overtaking.
LH: They had that 1.4s advantage to the others so...

Valtteri, same question to you first.
VB: Once I got close to Max, we knew he was going to go long. And we knew he had to stop. And I obviously had a long stint ahead of me. So, yeah, there was no rush. I was managing really. Then I got instruction from the team to close the gap to Max, and try and overtake, so I was getting, step-by-step, closer and then I really started to push a bit more. But yeah, then I got the call to swap places and that was it.

The second part of the question was that you'd had the radio messages from Toto and James, was the scenario not one that had been planned-out earlier?
VB: Honestly I don't want to talk about what we spoke of before the race. Inside, it's between us - but obviously, it was a little bit confusing, the situation but it's our thing, what we speak inside.

Q: (Phil Duncan - PA) Lewis, I know you said it was a team decision, the move, but did you personally think you might move out of the way towards the end of the race when you knew you would probably finish ahead of Seb. And Valtteri, do you think that the team made the right decision?
LH: Honestly, at the end of the race I didn't feel anything. When I went past, I told you, I didn't feel good. After that it was all about trying to bring the car home, so I wasn't really thinking of anything else.