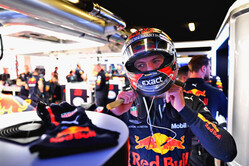 Max Verstappen: "We knew before qualifying that we would have to start from the back tomorrow, but I think it has all gone better than expected so far. We did a good job in Q1 which I'm happy about. The car has felt good all weekend, except for this morning, when I had some troubles, but we managed to turn it around and we are competitive again. We are closer than expected, what we lose on the straights, we can definitely make up in the corners. Even though we had good pace today, I don't think it's too painful for us to take the penalty here. We needed a new engine anyway, so it's good for upcoming races to take it now. The performance we had today shows again that we've worked very well on the set-up. From FP3 to qualifying we made some good steps forward so I'm confident about tomorrow. We just have to make sure that we have good exits out of the last few corners and keep our tyres alive, because the overtaking will not be easy on the tyres. If you follow other cars closely, it's hard on the front tyres, so we have to consider the best approach. You never know what can happen and we won't stop fighting, but from where I'm starting, I think the most realistic birthday present will be fifth."

Daniel Ricciardo: "Knowing you're taking planned penalties before the weekend makes it easier to accept that you won't complete qualifying and then you can just focus on the race. Obviously, we are never going to know where we would have been in Q3 but we're pretty happy with the car this weekend and we've performed well on a circuit that we aren't normally that strong on. There is a lot to do tomorrow and that's when the fun really begins for us. There are a few of us out of position at the back of the grid, so let's see who can fight to the front quickest and have some fun doing it. I actually hope the tyre degradation is high, like we have seen so far this weekend, that way nobody will be cruising on an easy one-stop strategy and hopefully we can provide some real entertainment. The main thing for now is to decide which tyre to start the race on. I think the temperatures are going to be higher tomorrow as well and the long run down to Turn 2 will be interesting. If I'm honest, the main excitement today was my AFL team winning. I got up early to watch the game and it was well worth it, my voice is definitely suffering after all the shouting though. I will put it all on the line tomorrow and try to return the favour."

Christian Horner, Team Principal: "Having chosen to take strategic power unit penalties this weekend at a circuit that hasn't yielded positive results for us in the past, we made the decision not to run past Q1 today. It was pleasing to see that we had more pace than expected in qualifying and looking at the times, had we chosen to run to the end of the session, we were on track to challenge Ferrari. With the cars set-up solely for the race and an open choice of tyre strategy, I know both Daniel and Max will fight hard to gain maximum points for the Team tomorrow."