Vettel: I still believe we have a chance to win 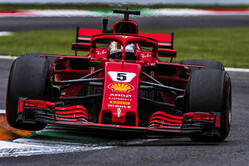 While to most a 40-point lead would suggest the title fight was almost done and dusted, just days ago Mercedes boss Toto Wolff insisted that such a lead doesn't offer any comfort.

Of course, Sebastian Vettel has come from behind before to take the title, winning three of the final four races in 2010 to turn a 10-point deficit into a 4-point advantage.

However, an on-fire Lewis Hamilton is not likely to serve up the sort of performance Fernando Alonso delivered that year in Abu Dhabi, and Vettel will need to raise his game several notches if he is to close the gap far less leapfrog the Briton.

"Obviously we expect to do well as we are one of the top three teams," he said, "but I don't have a clear idea of what will happen. After tomorrow we'll see how the other cars work and how we feel with ours.

"We are some points behind in the championship and we need to catch up to make sure we are there; that's our target," he admitted, "and the best way to do it is to finish ahead.

"That's what we generally try to do, so our plan doesn't really change from race to race. We try to give everything we have and I still believe we have a chance to win.

"We always have a look at what we did over the weekend and certainly after qualifying in Singapore we didn't get the best out of our package, but we tried everything during the race. I think we had a good start there and then we tried to use all the opportunities we had, but it didn't work well enough; we didn't perform the best way and the others were faster than us. So, we need to give credit to the others.

"Our car is different this year as last year I think it was a surprise for many people to see we were so competitive, but this year everyone knows it is strong. I think we don't have to get distracted by the result, but we need to focus on the job we have to do and see where we are.

"Some races didn't go the way we wanted to, but all of us are very motivated; the guys in the team have been nice to me - and they meant it - and this really helps me to overcome these races. I get all my energy from outside, thanks to our fans and supporters. It's great to receive positivism and support from all of them."