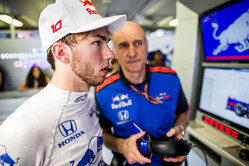 Pierre Gasly: "It has been tricky for us since the beginning of the weekend because we were not as competitive as we had of hoped yesterday. Today was a bit better but there wasn't much we could do to compete with the other teams for Q3. We struggled with balance and grip so we tried a few things to find a solution, but we weren't able to put it together which has made it difficult to extract the most performance out of the car. We're aiming to make up some positions tomorrow, we know in Singapore that can be difficult, but we are usually competitive on the Hypersofts in extending the life of the tyres, so that will be the target during the race."

Brendon Hartley: "We had a tricky session this morning, but we made some changes and got the car in a better window for Qualifying. It was pretty close to Q2; I had some traffic in my first run, my second run was clean but I made a couple of small mistakes in the middle sector which cost me time. Pierre got me by a tenth and a half of a second, and that was the difference between getting knocked out in Q1 and progressing to Q2. It's a tricky track, you only get one chance around here. We were very good on tyres yesterday which was positive, so I remain hopeful we can make the strategy work and challenge for points in the race. We were hoping for better pace this weekend, but let's see what tomorrow brings."

Guillaume Dezoteux (Head of Vehicle Performance): "Following a difficult Friday during which our short run pace was not looking great, we underwent a lot of analysis on car setup and tyres. We had a plan for FP3 and it worked pretty well for Pierre, who was able to put a good lap together. However, he suffered from excessive oversteer in the last sector during the second timed lap, while it is not ideal we can expect it from this kind of track layout. Brendon had a more difficult time in final practice as he wasn't happy with the handling of his car. We were definitely expecting something more from the Qualifying session here in Singapore, especially following the steps forward we made in FP3. Q1 was focussed on managing the traffic and chasing track evolution. Pierre did a good lap on his second run but Brendon made a mistake and didn't make it through. During both runs of Q2, Pierre struggled with car balance and lacked rear stability which meant he wasn't in a position to fight for Q3. Now we will analyse all of the data to get a better understanding of what happened and learn from a difficult session on a challenging track. The strategy for the race tomorrow is very open - between a one and two stop - and we had pretty decent pace during our long runs on Friday. Anything can happen here and our fans can count on us to try our best and fight hard in the midfield tomorrow!"

Toyoharu Tanabe (Honda F1 Technical Director): "As usual, we optimised our engine management based on the data we saw in free practice yesterday and we saw some improvements in FP3 on the PU side and also for the chassis, with the drivers commenting the car felt better than on Friday. However, this was not enough, with Brendon unable to move out of Q1 and Pierre starting from 15th. As for tomorrow, our long run pace looked quite good, so with good tyre management and strategy we will hope to move up the order by the end of the race."