Will the UK's switch to Pay-TV ultimately prove costly for F1? 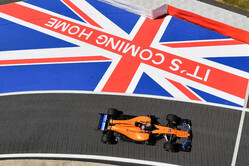 As it stands, millions of F1 fans in the UK have just three more races which they can experience live and for free. Indeed, amidst speculation that the 2018 season title fight will go down to the wire, should that be the case they will have to rely on a highlights show later that day as the season finale isn't one of those three.

Currently, those millions of fans have just the Russian, Mexican and Brazilian rounds before, in 2019, all live coverage of F1 in Britain is shown on pay-channel Sky only.

While there is talk that the British Grand Prix - as one of British sport's 'crown jewels' will continue to be shown live - millions of F1 fans will either have to accept watching their sport in delayed highlights form or bite the bullet and sign up to Sky.

That said, many of those fans are unable or simply unwilling to pay for coverage, especially when it involves anything related to Rupert Murdoch.

Until 1996, fans in the UK had the BBC to thank for their coverage, but in a shock deal - that Murray Walker is understood to have heard announced over the radio - in 1997 commercial channel ITV won the rights before the BBC won them back in 2009.

A couple of years down the line however in 2012, the BBC sought to back out of its contract and as a result a deal was agreed which saw coverage shared with Sky, the pay channel getting all the races (and practice sessions) while the BBC was reduced to just ten.

2016 saw a similar deal agreed between Sky and Channel 4, however, behind the scenes Bernie Ecclestone was orchestrating a deal which would see Sky become the sole live broadcaster of F1 in the UK from 2019 until 2024.

While anyone who plays 'bullshit bingo' whenever Messrs Carey, Bratches or Brawn appear on their screens will be aware, the word 'fans' figures prominently, yet despite this the deal stands, and as a result those millions of fans face the loss of free live coverage in just a couple of months.

And of course, with the British Grand Prix currently set to disappear from the calendar after 2019 that takes care of the need to find a broadcaster to show that particular race for free.

The teams are also pretty good at 'bullshit bingo' but they too have said little about the deal, then again, when one considers that they share 68% of the sport's profits why would they, especially when the Sky deal from 2019 is thought to be worth around £150m a year.

However, in focussing on short-term gain, is the sport making a mistake given that the teams' sponsorship income is driven by exposure which could steadily decrease as more Pay-TV broadcasters come on board?

According to data obtained directly from BARB, which compiles audience measurement and television ratings in the UK, and which is jointly owned by the BBC, ITV, Channel 4, Channel 5, Sky and the Institute of Practitioners in Advertising, Channel 4 regularly attracts 2 - 3 million to its live race broadcasts.

At this point one should point out that other Sky channels such as Sky Sports Main Event, Sky Sports Mix and occasionally Sky One, also show F1 races, and consequently these stats are not reflective of Sky's total audience. We are using BARB's figures for the flagship Sky Sports F1 channel as it is guaranteed to show all races.

The figures are for the average audience of the live broadcast and showings within 7 days afterwards, either by recorded playback or video-on-demand.

In 2016, the British GP saw 695 thousand watch Sky Sports F1's live coverage of the race, while 2.53 million watched the race on Channel 4. Similarly, the season concluding Abu Dhabi Grand Prix, which saw Nico Rosberg claim the title, was watched by 2.35 million on Channel 4 while 622,000 watched on Sky Sports F1.

Anyone who thinks that these millions of fans are going to switch over to Sky next season may be interested in some prime real estate in the centre of London that's going cheap, but for a sport which in 2017 saw global TV audiences hit a 13-year low, this doesn't appear to be a good move.

To add to the conundrum, Disney is currently seeking to takeover Sky, though it faces stiff opposition from Comcast. Should Disney prove successful, in a move echoing the time Bill Ford was looking at his company's accounts and demanded to know who a certain Edmund Irvine was, the American noting that said Mr Irvine was the highest paid employee on the Ford payroll, the successful bidder in the Sky takeover may well ponder why the F1 coverage (which includes the UK and Italy) is thought to be amongst Sky's biggest expenses, especially when Disney-owned ESPN is believed to broadcast it for free.

As Liberty ponders budget caps, engine rules, glamour and parties, it would do well to note the impact the move to Pay-TV is already having in Italy and Brazil, and at a time viewer numbers have fallen by 41.3% over the last decade.