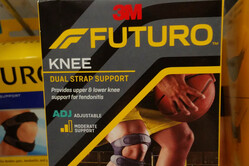 As F1 bosses seek to address their first genuine crisis since taking control of the sport - namely the ongoing dispute over whether Racing Point Force India should receive prize money from the outset - another niggling issue has been placed on the back burner.

Adversarial proceedings were due to begin last week relating to the new F1 logo introduced at Abu Dhabi last year, which the American conglomerate 3M is opposing, claiming that it bears a striking resemblance to that being used on its Futuro range of therapeutic clothing which includes ankle supports, knee straps and compression tights.

Early last month, the European Union Intellectual Property Office (EUIPO) notified Liberty that "the adversarial part of the opposition proceedings will begin on 27/08/2018".

However, days before said proceedings were due to begin, EUIPO revealed that "at the request of both parties to extend the (cooling-off) period before the start of the adversarial part of the opposition proceedings, this period has been extended by 22 months".

In other words, both parties are talking and have now been given time to reach an agreement.

Michael Gardner, a partner at law firm Wedlake Bell, tells Forbes that "the 'cooling off' period is provided so that the parties can have time to negotiate a settlement of the dispute without the need to run up costs preparing evidence or submissions in the proceedings. The fact that the cooling off period should have been requested by the parties and extended in that way indicates that they are talking to each other about a resolution of the dispute."

Indeed, the EUIPO filing reveals that; "if either of the parties wants the adversarial part of the proceedings to commence, they can opt out and inform the Office thereof unilaterally, without the consent of the other party.

While it is unclear if a financial settlement is under discussion, Gardner admits it is entirely possible F1 will seek to end proceedings by paying 3M.

"As for whether a negotiated settlement could bring the opposition proceedings to an end. Yes, that is perfectly possible," he says. "The parties can reach a settlement whenever they like. Provided they both agree, the proceedings would be stopped at that point."

While a settlement would further hit the sport's balance sheet, which has already taken a hammering over the last year, and would ultimately cost the teams, F1 might consider this a small price to pay compared to the embarrassment (and cost) of having to change its much-trumpeted logo.