Marko: Ricciardo has no alternative 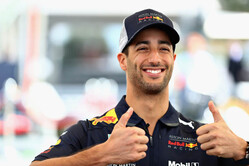 Speaking ahead of his team's home Grand Prix, Red Bull motor sport consultant Helmut Marko said that as far as he can see Daniel Ricciardo has no real alternative other than to re-sign for the Milton-Keynes-based outfit next season.

Out of contract this year, Ricciardo's plans for 2019 (and beyond) have been the subject of much speculation.

The Australian, who has said he is seeking a two-year deal before seeing what happens in 2021 when the formula is revised, has been linked with all manner of teams including Ferrari, Mercedes, McLaren and Red Bull.

While Ricciardo has admitted that he is waiting to see what Lewis Hamilton's plans for next year are, the recent announcement that Red Bull will switch from Renault to Honda engines may influence his decision, as might his fear that the team's long-term plans are based around teammate Max Verstappen.

Talking in Spielberg however, Marko suggested that the popular Australian has little option but to stay put.

"Mercedes and Ferrari both have a number one driver who is clearly declared," said the Austrian. "I know Ricciardo did not receive an offer from Ferrari and Renault, as far as I know, will stay with their current drivers.

"Above all, Renault I don't think are in the budget region that Ricciardo has in mind," he added. "He has no sporting alternative to us, even if he probably imagined it differently.

"We want him, to continue, but not at any price."

Ricciardo remains tight-lipped on the matter, merely telling reporters that a decision will come "soon". That said, the Australian doesn't come across as the sort of person who will take too well to being told he essentially has no alternative. Furthermore, a 'surprise' announcement regarding Fernando Alonso's plans could trigger a high-octane game of musical chairs.