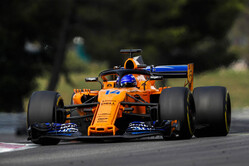 For a brief while it was like the old Honda days... when around 40 laps into the French Grand Prix, a clearly seriously peed-off Fernando Alonso declared: "No brakes, no tyres, we're out of the points... I don't care too much."

But rather than park up and seek a deckchair, the Spaniard continued on his not so merry way, subsequently deciding to have a go at fastest lap.

His first attempt was compromised by the VSC that followed Lance Stroll's tyre failure and then suspension damage left him little option but to pit and retire, though he was officially classified 16th.

Explaining the radio outburst, Alonso declared it was in reaction to the excitable messages he was receiving from the team.

"On the radio the team was definitely overexcited," he said, "telling me the gaps with the fifth guy, the sixth guy...

"I was last after the safety car," he continued, "and I had a problem with the brakes overheating, I had one set of tyres for the whole race because we stopped on lap one to fit the yellow tyres so I think it was a defensive race.

"It was not frustration," he insisted, "but we know that this weekend we've been quite uncompetitive. This was by far the worst performance of the year. So, I really hope it is a one-off and not the normality.

"It was all the race on the back foot," he continued, "and from the start we had to avoid a lot of accidents in front of us. People seemed to shortcut the circuit and nothing happened. We stay on the circuit and we came last just doing that.

"It was not our race," he sighed, "and after we had a suspension problem at the end. We could not even see the chequered flag, so a not very competitive weekend for us.

"But in five days we have another opportunity to forget this, and I really hope that Austria and especially Silverstone will be better circuits for us."