Champagne turns to water for Williams 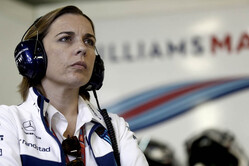 In the wake of the meeting in Bahrain in April at which Formula One's owners put forward their initial proposal for the future of the sport, Claire Williams, in particular, was buoyant.

"I was extremely positive, I have to say," she said of the meeting. "I think we've all hoped for change under our new management and I think today they presented change."

Indeed, Williams claimed FOM's proposals would breathe new life into the sport and her team and left her considering opening a bottle of Champagne to celebrate.

As is so often the case, the bottom line was money, and for a struggling Williams to hear of budget caps and a more even distribution of the prize pot was the best possible news.

Indeed, while not exactly pleading poverty she admitted that things could not simply continue as they are.

"For a team like ours, based on what they presented, it was an extremely good day for us," she said. "I came back thinking let's crack open some champagne, because from our perspective if we can get these new regulations through, and if Liberty/FOM do everything they say they are going to do, then from our perspective I know that Williams' future is safe.

"That's not to say that we were on the brink, or anywhere close," she insisted, "but with today's sport and the way it is structured and with the financial disparity between teams then the likelihood of Williams' survival into the medium and long-term was looking pretty bleak."

Two months down the line however, her team in disarray following two high-level 'departures' and still rooted at the bottom of the standings, there is no apparent firming up of the engine and financial proposals any time soon, and following another meeting with the sport's owners in Monaco, Williams isn't quite so positive.

"Well I'm not on the Champagne any more, that's for sure," she sighed. "More water," she added with a grimace.

"They're working hard, clearly, there's obviously a lot of work to do, we all know that, and we have to work together, which we are doing, in order to make sure that the proposals that we're going to have for 2021 work for all the teams as best they can - and that's not an easy piece of work.

"It's not exactly what we want, as a team, as Williams, but I think we're probably getting closer and hopefully if we can get the budget cap in place that brings us... I know they're reporting $150m but if it was a bit higher then fine, we all have to compromise.

"I think they are very close to the power unit regulations, to get those locked down, which would be great because hopefully that would attract new OEMs into our sport. It's just a process, a continual process that everybody's working hard to make sure that we can get set in stone sooner rather than later."

However, Force India's Bob Fernley was quite as pessimistic.

"I think I like the process that Formula One Group are bringing in where it's very much done by consensus, as opposed to individual teams pushing their own agendas, which is what it used to be," he said. "So, I think they're going through a very constructive process in that manner.

"I agree with Claire, that we need to get the engine regs nailed, hopefully this month so that those can move forward. I'm less concerned about the chassis regs. I think we could wait a while for those because again, the sooner they come out, the bigger teams have got opportunities to put resources behind it - so it's not urgent that this happens as long as we keep moving on the path.

"We've made a change for 2019, which is a step towards the 2021 programme, which will give some very clear direction. They won't get it right for sure, but it will give good direction in terms of where we want to be for '21. We could be looking if there are elements for standardisation, or proscriptive elements. Those could start coming in quite early as they don't affect development. So, I think it needs to just have that cohesive process - and hopefully over the next few months we'll see that."