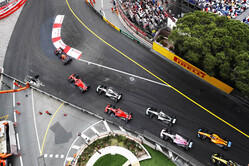 Other than Daniel Ricciardo's heroics out front and a few skirmishes further down the field, one has to agree with Lewis Hamilton and Fernando Alonso in admitting that Sunday's Monaco Grand Prix was a bit of a snooze-fest..

Then again, with the Australian down on power by around 25%, had Hamilton eased up on the radio messages about his tyres and put a bit more effort into taking on the Australian, those final 60 laps could have been a bit more entertaining.

While Hamilton has since called for changes in Monaco, suggesting an alternate track layout, NASCA style safety car periods and possibly even a change to the race format, his boss, Toto Wolff, has said there should be no kneejerk reaction and that Monaco is Monaco.

"This is Monaco," he said. "It's rare that there is no safety car or no major incident and it's happened this year.

"If you look at Baku, how the circuit is being laid out with the long straight, it provides spectacular racing. Monaco in the past has provided spectacular racing because of how close you can race here, the climate changing, safety cars...

"We must not swing between depression and exuberance," he insists. "This time it's the depression again but, at the next weekend, we might have a good race and everybody is falling into mania of how great the racing is. There are just days like this."

Reflecting on his own team's performance, he said: lead in the Constructors' and Drivers' Championships.

"As much as we like to win races you need to be also conscious enough that there are days where it is more difficult," explained Toto.

"It was a tough and frustrating afternoon for Lewis and Valtteri. Third and fifth is damage limitation - I would have probably taken that before the weekend.

"We can be pleased to leave Monaco in the lead of both Championships. But, we always want to aim higher.

"Now we will regroup and aim to return to winning form in Canada.