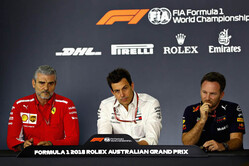 For the second successive race weekend, viewers are denied access to live coverage of the team principals press conference.

While the drivers' press conferences rarely deliver anything of note, most sticking firmly to the non-controversial, sponsor and Liberty friendly script provided by their various PR teams, occasionally there are some fun and games and maybe even a little antagonism.

The Friday version featuring the team principals however can usually be relied on to provide a little more entertainment.

Though few have ever reached the heights of Paul Stoddart's run-in with Ron Dennis in Canada all those years ago, as recently as Melbourne, the obvious hostility between Christian Horner, Maurizio Arrivabene and Toto Wolff was obvious, especially when members of the media asked the right questions, such as Ferrari's recruitment of Laurent Mekies from the FIA.

For reasons best known to themselves, whereas the Friday press conference was previously held after FP2, in Melbourne and again in Bahrain it is held between the two F1 free practice sessions.

Furthermore, as was the case in Australia, the Friday press conference is not being televised live.

All manner of things have been said since Melbourne, be it Christian Horner complaining about Mercedes engine modes or McLaren and Force India querying the relationship between Haas and Ferrari; surely therefore what great entertainment - a key buzz word for Liberty - it would make to see these accusations made and responded to in public.

In the wake of the fall-out over the proposed engine rules for 2021, never mind its plan for the redistribution of the prize pot, Liberty has said that it doesn't want the sport's dirty washing done in public. With this in mind, one cannot help but feel that perhaps there is more to this than meets the eye, as limiting public access to the Friday press conferences - and the public responses to those (hopefully) awkward questions - though enlightening for the fans could be embarrassing for the sport's management.

Hopefully, the failure to broadcast these press conferences live is just a one (two) off and not a clumsy attempt at censorship.