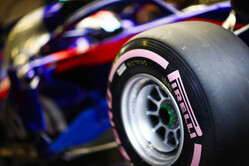 Last year's season opener was one of several races over the course of the season that saw just one pit stop.

In a bid to spice up the action this time around, Pirelli has revealed that it is using new software which will run various simulations in order to not only nominate the three compounds that might produce the best racing but also ensure a minimum of two pit stops come race day.

"We have now a very good software tool that we created this winter, to make all the combinations with three different compounds," Pirelli's motorsport boss Mario Isola told Autopsport.

"Usually of course the target is two stops," he admitted, "but it's not only two stops, we are taking the combination which on paper is giving us the higher number of strategies, to try to have more action on track.

"The software is making a lot of comparisons in a quick way," he continued, "but you need to put in the right numbers. If we collect good numbers from here, we can update the software in order to have new simulations and to decide the selection.

"We had a different system in the past, but now we have a new one that is considering more information. We have a better, more representative output. The model is stronger, it's more solid."

The delta lap-times between compounds, as revealed in Barcelona, will allow Pirelli to decide whether it will be worthwhile 'skipping' a compound as opposed to using three progressively softer compounds.

"If we discover for example that soft, supersoft and ultrasoft are too close, we can nominate, as we did for China, where we did medium, soft and ultrasoft," said the Italian. "It's important that we collect the delta lap-times between compounds to decide the selection.

"If we confirm the numbers that we have seen in Abu Dhabi – between soft and supersoft we had 0.6s, and supersoft to ultrasoft was 0.4s , he said, referring to last season's post Abu Dhabi GP test, "depending on that, we can fine tune the selection and try to choose the best combination."