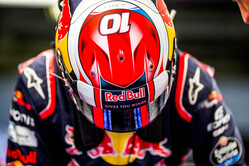 Pierre Gasly: "My qualifying lap was good and I feel happy about it because I managed to put everything together, it was a decent lap... The only thing I'm not super happy about is the performance, of course - to qualify only 17th is not what we want to see and it's a bit frustrating not to be fighting for higher positions. Having said that, I think we made the most out of the potential we had today and that's important. What I really wish for now is that we hold on to sixth position in the Championship tomorrow - it's going to be a difficult task, but nothing's impossible! We'll keep pushing and see where we end up!"

Brendon Hartley: "I'm not happy, that wasn't a good session for me... We've been lacking a bit of pace all weekend on both cars, but in particular mine. We've obviously been making a lot of changes - we had nothing to lose in this session as we were going to start from the very back anyway because of the grid penalty... But it was a pretty scrappy session from my side, I didn't get it together at all...It's a little bit frustrating, but it doesn't really change the result. Obviously, I would've loved to have banged in a banzai lap, but it just didn't work out. On the positive side, all of this is good preparation for next year! All we have to do now is push as much as possible tomorrow - points are going to be pretty difficult and it will be quite a tough ask to defend our sixth position in the Championship, but we'll do our best and stay optimistic until the very end!"

Jonathan Eddolls (Chief Race Engineer): "Because of the struggles we suffered yesterday, the engineers spent an awful lot of time analyzing all of the data in terms of tyres, aerodynamic behavior and mechanical set-up to try and understand the issues that we had yesterday. We understood a good number of problems, even though there were still some questions unanswered. Therefore, we developed the FP3 run plan to try to understand this further and to cover all of the work the plans were slightly different across the two cars. We obtained some interesting information in this session, but clearly we were still off of the pace. Going into qualifying, we made some pretty big changes, especially on Pierre's car. This made a step in performance on his car even though, obviously, it's not where we want to be. On Brendon's car we tried some compromises in Qualifying because he had slightly different handling characteristics compared to Pierre in FP3. We feel that we've underperformed today but, even if our main focus has been on next years' car for some time now, this doesn't mean that we will give up until seeing the chequered flag of tomorrow's race - we need to defend our sixth position in the championship and during the race anything can happen, so we believe it's of course still possible."