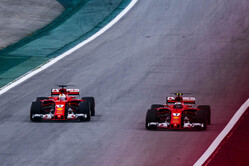 Scuderia Ferrari has been a regular on the front row of the grid, including taking two pole positions, since the last Singapore Grand Prix and Brazil was no exception today as Sebastian topped the time sheet right up to the last run in Q3 and lost pole to Bottas by a mere 38 milliseconds, while Kimi lined up right behind his team-mate. Tomorrow, in what are expected to be warmer and dry conditions, the 71-lap race promises to provide fans with lots of excitement.

Sebastian Vettel: "We have improved since Friday, and that's the important thing. I was happy with my car today, but in my last run, I was perhaps a bit too shy in braking for the first corner. I had a better run at the end of my out-lap, so there was probably more grip than I expected there. In the last sector, I knew I could make up for some of the lost time, and I did, but it wasn't enough. However, it was very close, and we're usually even closer in race conditions, so my motivation is high for tomorrow and I'll being aiming for a win."

Kimi Raikkonen: "The feeling with the car was good most of the time, but somehow the laps were always a bit tricky, with everybody trying to get their free space. When the tyres switched on well, then everything was easier, but with the traffic in the out-lap it was not always the case. Some sets were feeling better than others purely because of having a bit better out-lap. It was a bit hard to trust them and not get a front lock-up at the first corner. Overall the car itself was nice to drive when the tires worked, so it's a bit of a shame. It was not the most straightforward qualifying but in the end it was a decent result. I think we did a solid job today, we can consider it a good team result. For sure there was more to get, but the race is tomorrow and it's going to be long. For the start we'll try our best, the first corner is quite tight, so we'll try to make a good start and see what we can get."