Williams in no rush to name second driver 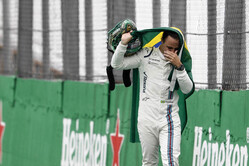 As Felipe Massa prepares for his final Brazilian Grand Prix (again) Williams is in no rush to name his successor.

Who will forget the emotional scenes twelve months ago, when, taking advantage of the deployment of the safety car after he had crashed at the top of the hill, Massa made his back to the pits on foot walking along the track, waving to his adoring fans while wrapped in his country's flag.

A few weeks later his F1 career came to an end... and then Nico Rosberg shocked the world by quitting, subsequently leaving Williams in need of a driver to replace a departing Valtteri Bottas.

This time around there will be no phone calls however, this time the retirement is for real.

However, speaking at Interlagos, Paddy Lowe was giving little away in terms of who will partner Lance Stroll next season.

"We're very unlikely to make a decision in short order," he said. "We have a number of different options and we'll take our time with that and let you know when we have an answer."

Having already held a 'shoot-out', though the Grove outfit hates the term, involving Robert Kubica and Paul di Resta, little has been said to indicate the team is any closer to making a decision, the waters further muddied by talk of Daniil Kvyat being in the frame also.

Speaking on Thursday, Stroll clearly isn't bothered who sits the other side of the garage.

Turning to Massa, he added: "He's been a great team-mate to have. He has a bunch of experience, he brings a lot of knowledge to the team. I think we've understood a lot about the can and how to improve the car throughout the weekends and, for sure, he's been a great guy to have in the team.

"I think everyone's really enjoyed having him at Williams, and he's had an unbelievable career: many victories, many times on the podium, one point from winning a world championship, so, y'know, definitely an A+ career, that's for sure."