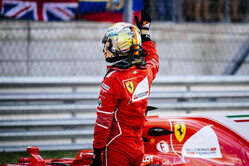 A solid team effort and a fine piece of driving on his very last run means Seb will start from the front row of the grid tomorrow. Kimi was unable to fully capitalize on the potential of the SF70H and ended up with fifth fastest, setting exactly the same lap time as Daniel Ricciardo. However, as the Australian set the time first, he starts ahead of the Ferrari man. Now it's time for Scuderia Ferrari drivers and the whole team to focus on tomorrow's race, when temperatures are expected to be lower than in Qualifying.

Sebastian Vettel: "My final lap in Q3 was good enough for the front row, and in the end we got closer than we had expected. I am looking forward to the race, and then tomorrow we'll see what we can do. The car is good and generally we have a better pace in racing, so it should be better tomorrow. Again, the team did a splendid job in rebuilding the car around a different chassis overnight and not even breaking the curfew! For tomorrow we need a good start first of all and then we need to put pressure on our competitors. I'm not too concerned about starting on the less rubbered-in side of the track, as we've seen in the past here that you can attack. We have the car to do so and we can fight."

Kimi Raikkonen: "Today the car was better than it had been so far this weekend. After the Friday session we made some changes and in qualifying I had a good feeling. We tried our best, but fifth position was the maximum we could get. I think there was more to take out of the car, but in some places it was a bit tricky to get it right. I struggled to put all the corners together, some laps were good and in some others it was more difficult. It was a decent qualifying, but for sure it could have been better, so I can't be satisfied with the result. At the start tomorrow it will be quite tight; we'll try to make a good getaway from the line and see what we can achieve at the first corner..."