Vettel: I still think we have a chance 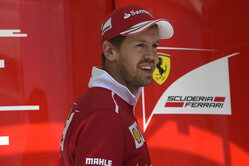 While, against all odds, he overcame a deficit of 25 points to beat Fernando Alonso to the 2010 title, it would surely take a miracle for Sebastian Vettel to overhaul Lewis Hamilton and his 59 point advantage with just four races remaining.

Yet, according to the German, it is still possible.

"I still think we have a chance" he said as the Austin weekend got underway, "we only have to stay focused on our job.

"In English, they say it’s not over until the fat lady sings," he smiled. "We need to make sure she shuts up for quite a while."

"We have a great car and a good package, which could have won the last two races; we didn't, but this doesn't mean we don't have a chance to win the last races. So, we need to look at what's next and focus on the next events.

"Overall, I think it's been a very good season for us so far," he added. "Some people will base their judgement on the last couple of races, which were not so good, but I think we are the team that improved the most this year.

"Probably nobody expected us to be as strong as we have been. So, I think there are many positive aspects. We still have races ahead of us and a strong car and we keep improving. We are going in the right direction and we have clever people on board. So I don't look at what is already behind us, and I stay focused on what's ahead of us.

"As for this weekend, I honestly don't know what to expect here, but the track is 'mixed' and the speed is there, so I am optimistic."

"I don't see any reason why we shouldn't be strong here," added teammate Kimi Raikkonen, "but we must wait and see. We need to put things together better in the early part of the weekend and make sure that we can be up there all the time.

"In the last races we had some difficulties," he added, a masterpiece of understatement again, "but let's not forget that in every one of them we've had a Ferrari car on the first row of the grid in qualifying.

"The atmosphere and the approach in the team haven't changed and I can't find a reason why they should have. Obviously we have to understand and fix the issues; we need to minimize them and finish the races first of all, otherwise you pay a high price. But this all is part of racing, it's not the first time it happens and it won't be the last. We keep on working together as a team, even more closely now."

Asked about the recent reliability issues, Vettel admitted: "There are things we must do better as a team, things that need to be managed and steered better from our side.

"It's normal you push the limits and sometimes you push them too far," he continued, a possible reference to Toto Wolff's claim that Ferrari is now paying the price for its massive step forward this year. "Sometimes you do small mistakes that have a consequence later on.

"It's always a mix of those things but things can break. It hurts a lot when it happens but it doesn't happen for no reason so we need to make sure we find a solution to the problem and not just fix it but find a solution for the long term."

Aware of the inevitable calls from the Italian media and the tifosi should the Scuderia once again shoot itself in the foot, the German said: "I don't think there is time to panic because we are so busy.

"Maurizio is doing a very good job in keeping everyone in the right line, looking forward. My role is to push as hard as possible on the track. Day to day, Maurizio is a lot more around for the people and there for the people. He's doing well. We are very busy. There's not much time to think about many things."