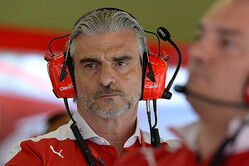 Scuderia Ferrari comes away from Japan with the points for fifth after Kimi made up that same number of places off the grid. From the outset, Sebastian Vettel was robbed of any chance to fight for the win, when a spark plug on one cylinder failed.

However, Kimi's performance proved that the team and the car are capable of getting the job done and until the maths says it's over, we will keep trying.

Moving on to the race: it started wth Seb on the right side alongside Hamilton, with Kimi tenth, after taking a penalty for the gearbox change between P3 and qualifying. Seb got off the line well, but not well enough to take the lead, as Kimi maintained position, before dropping down the order after running off track, while dueling with Hulkenberg. But on Seb's car there was already a problem with the ignition and he lost one place on the opening lap.

The Safety Car came out after Sainz crashed and Sebastian was sixth and losing ground. The number 5 car was called back into the pits and the mechanics tried to fix the problem. However, a few minutes later Seb climbed out of the cockpit. A spark plug was broken and it was pointless to go on.

Meanwhile, having started on the Soft tyres he had used in Q2, Kimi found himself eighth, 18 seconds off the lead. He passed Massa on lap 14 and kept chasing. By lap 28, he was fourth before pitting for Supersofts and rejoining in sixth. At the start of lap 33, he set his sights on Hulkenberg and passed him. From then on, he managed the fuel and tyres in the closing stages, also putting in some very quick laps, while the Virtual Safety Car came out with four laps remaining.

With two cars on track, it would have been a different story.

Maurizio Arrivabene: Once again, despite our car clearly having great potential, things did not go to plan. The problem that stopped Seb was down to a broken spark plug. We spotted that something was not right on the lap to the grid and we tried our best to fix the problem. Seb got a great start, but shortly afterwards we had to call him back to the garage prior to retiring the car. Kimi's race was compromised by his less than ideal start position, which came about because of the penalty he had to take for a change of gearbox following his accident in P3. From there, he was able to move up the order as far as fifth place. As I've said before, we know that the car, the drivers and the team are all on the pace. That is why we will tackle the coming races with great effort and even more determination. Right up to the last corner of the last Grand Prix.

Kimi Raikkonen: Our starting position today was not ideal. I did a decent start on the soft tires and in the first lap I tried to gain some positions, but when I attempted to pass a Renault I ran wide and lost some places; so I had to make them back. The feeling in the car was a little bit tricky all the way through the race, not the nicest balance; some laps were ok, some others a bit more difficult. It's quite tricky to follow other cars on this track; we did a fairly good job out of overtaking people but we were too far from those at the front. Obviously, the final result is far from being the best possible. As for Sebastian, I don't know what happened; we have made a lot of improvements over the last few years as a team, but now, for whatever reason, we suddenly seem to have technical issues coming out from nothing. It's kind of weird, our cars are running perfectly and suddenly on Sunday there is an problem that nobody expects. There is some work to be done on that side. Then we are going to push until the last lap of the last race and we'll see where we end up.

Sebastian Vettel: I don't know if this situation has much to do with reliability. But we didn't finish the race, so there is a problem. I think it was a small issue causing a big one. We didn't have power already at the start and we tried to reset everything getting the power back, but something didn't work. Of course now the Championship is more difficult and not finishing the race doesn't help. I also said to the guys to get back home and have some rest because it's been a tough week with a lot of changes. Then we'll come back with a better package to do well for the last four races and then we'll see. Overall, I believe the team is in a good way. We are improving race by race and there are positive aspects too. But, of course, today you can't look too much at positive things.