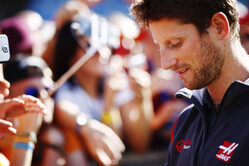 It's understood that officials at the Sepang International Circuit are in talks following Haas' request for compensation following the accident involving Romain Grosjean which brought Friday's second practice session to an early end.

The Frenchman was seen to lose control of his Haas after a drain cover loosened by Valtteri Bottas caused the car to spin at 170 mph and subsequently hit the barriers in an impact measured at 17G.

Though uninjured in the violent accident, both Grosjean and his team made it clear they were far from happy, insisting that such a situation is unacceptable.

"It was completely out of our hands," said Steiner of the incident which caused around half-a-million pounds worth of damage to the car.

"I cannot say, 'oh, OK, we now let, let's say, three-quarters-of-a-million (dollars) go because somebody forgot to weld something in, it's all good'.

"We pay to come here, we pay a fee to come here, everybody has to pay," he added. "We discussed it and they were very professional about it. They have insurance, let's see what we can do."

Following talks with the American team on Sunday morning, it is understood further talks will be held later this week.