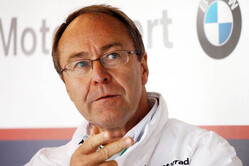 For as long as anyone can remember, Volkswagen, along with the various car brands that form the VW Group - brands which include Porsche, Audi, Bugatti, Lamborghini and Bentley - have been linked with F1.

In April 2015, the shock departure Ferdinand Piech, grandson of Ferdinand Porsche, following a boardroom battle with Chief Executive Martin Winterkorn, kick-started the rumour mill yet again, Piech having been a long-term critic of Bernie Ecclestone.

Already enjoying a strong sporting presence with Audi and Porsche in WEC, Bentley and Lamborghini in GT Racing and VW itself in WRC, F3 and Rallycross, F1 seemed the obvious next move. Indeed, in 2012, Wolfgang Durheimer, head of Bentley, Bugatti and Motorsport within the VW Group, had said he was keen to see the company in F1 admitting involvement in the sport was vital for planned sales in the American, Asian and Middle Eastern markets.

At the time Red Bull was throwing all its toys out of the pram, threatening to leave the sport unless an alternative (competitive) engine supply could be found, the Austrian team held talks with VW, but then came the emissions scandal.

While Volkswagen has attended recent meetings of the Power Unit Working Group as the sport looks ahead to beyond 2020 when the current formula is due to end, the decision to take two of its brands - Audi and Porsche - into Formula E suggests the company does not envisage a future in F1.

Indeed, Group director Bernhard Gobmeier, believes the sport is on a dangerous path.

"Formula 1 is on a dangerous path. It is expensive," he said, according to Motorsport.com. "Most of the teams, apart from the big four, have financial problems. And tracks cannot pay what they are asking for. Due to its expensive nature, they are walking a very dangerous path in my personal opinion. We see it everywhere."

"Mercedes has over 1,500 people working on the F1 project," he continues. "That is not even considering the suppliers, though it is not so much. It is probably 2,000 people on two cars. You should consider how expensive wages are in England and how expensive material is.

"In America, they have cost control on their minds. They manage it well," he added. "In Europe, there are a lot of different categories. In some of them, cost control is really good. But, F1 is completely out of range and so is the WEC."

Other than costs, Gobmeier, who previously ran the Ducati MotoGP operation, believes the sport is not providing a good enough show, which further impacts teams in terms of sponsorship.

"MotoGP is above F1 from the show point of view. It is one hundred times better. There is no comparison. MotoGP, its supporting races and World Superbikes are way better than F1.

"Theoretically, MotoGP has the potential to commercially capitalise on its popularity. And they do. We have Ducati in our group and we can see what difference in sponsorship can be achieved. Ducati is achieving the biggest sponsorship. Even Porsche, Bentley, Audi do not achieve such big sponsorship. Ducati is special and comparable to Ferrari and the sponsors get real value. They do good activation at the races, both in terms of media, hospitality, programmes and other things. The car companies are not so good in that."