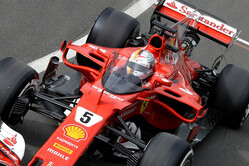 The device, which the FIA is seeking to introduce next year, having ruled out the Halo and Red Bull's Aeroscreen, made its public debut in today's opening session at Silverstone.

However, Sebastian Vettel, who had the dubious honour of being the first driver to try the device, was singularly unimpressed.

"I tried it this morning, and I got a bit dizzy," he told Sky Sports F1.

Indeed, yesterday's first shots of the device were noticeable for the reflected glare, and onboard shots during Vettel's run suggested a similar issue from inside the cockpit.

Furthermore, back in the garage, the German had great difficulty reading the timing monitor placed on his car.

The FIA plans another trial at Monza after which a decision will be taken on whether to introduce it next year.

That said, at a time a number of drivers have expressed doubts as to whether such a device is even needed, it is understood that the drivers' 'union', the GPDA, has not been consulted on the matter.