Silverstone break clause a matter of "when not if" 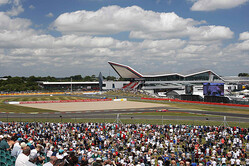 In the wake of a BRDC director's claim that Silverstone is set to trigger a clause in its contract which will mean it stops hosting the British Grand Prix after 2019, further sources within the club which owns the iconic track have spoken of their fears for the event's future.

"It is highly probable we will have to activate the break clause", the Mail on Sunday quoted Philip Walker, a director of the BRDC, as saying at the weekend. However, Forbes reveals that fears for the event are widespread within the club, with some saying that exercising the clause is a matter of when rather than if.

However, one BRDC member who is a senior automotive industry figure, claims that while the clause will be triggered before next weekend's race - in compliance with the agreement - the move might not be made public until after so as not to cause embarrassment for the sport's new owners or overshadow this year's race.

"Apparently there's been no movement from Liberty who haven't had the time to address all the issues," said the member. "So no bad will, just a lack of time.

"I therefore understand the BRDC board are left with no option but to terminate and Liberty are aware of this," they added. "It's just a case of when it will be announced rather than if it's announced. This has to happen before the Grand Prix but the BRDC don't want to cause any embarrassment or ill will for Liberty so I guess some time in the next week."

"The BRDC has no option but to exercise the break clause and wait for Liberty to come back and renegotiate," added another. "I am sure Liberty will not want to renegotiate but they have nowhere else to go if they want a British GP. Their biggest fan base in the world has to be in the UK and they would not want to alienate them."

"I think the BRDC has little choice but to give notice to Liberty," said a third. "It is a view I endorse as perhaps then we can return to business sanity instead of risking our future to pursue a dream. I guess this will be the opinion of most savvy BRDC members."

"It is clear the BRDC will have to exercise the break," echoed a fourth. "However, there seems to be willingness on both sides to retain the GP and they have the two year notice period to achieve that."

The original deal came at a time Silverstone had seemingly lost the race to Donington, the Derbyshire track having agreed a 17-year contract to host the race from 2010. However, the economic downturn of 2009 saw Donington's financier withdraw and as a result the BRDC, under its then president, Damon Hill, stepped into the breach.

While the original 17-year deal appeared hunky dory, finally guaranteeing the future of the event after years of political and financial wrangling, it soon became clear that all was not what it seemed.

Though the deal was for a manageable £12m a year, an annual increase to the hosting fee of 5% meant that by the final year of the contract the BRDC would need to find around £26m.

Late last year, after a string of disastrous moves which at one stage left the BRDC with just £9,000 in the bank, chairman John Grant finally pointed out to the club's members the rather large grey mammal in the corner of the room when he warned of the "potentially ruinous risk" of continuing to host the Grand Prix.

At a time of cuts and austerity, the British government cannot save the day, and while the sport's new owners insist they want to see Britain remain on the calendar, Chase Carey has made it clear that there will be no renegotiation of the contract.

"We will not be renegotiating," he said earlier this year. "We value Silverstone and we want the race to be a success and will work with them to help achieve that, but we won't be redoing agreements that were previously concluded in good faith between two parties."

In addition to losing the British Grand Prix, Forbes reveals that the BRDC is about to lose its president, with Dereck Warwick standing down after six years as successor to Damon Hill.

While John Grant announced Warwick's decision in December, revealing that a new president would be announced shortly, it would appear that the appointment has yet to be made. Then again, if the British Grand Prix is lost, one can imagine little desire to be the person charged with overseeing the move.