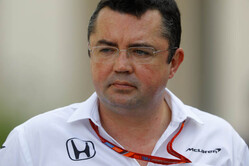 In the wake of another dreadfully disappointing weekend, speaking in the wake of the Canadian Grand Prix, just days after Zak Brown had admitted that Honda was on notice, Eric Boullier allowed his emotions to rise to the surface.

"For the first time this season, running in tenth place within spitting distance of the flag, we dared to hope," said the Frenchman. "OK, what we were daring to hope for were hardly rich pickings: a solitary world championship point for Fernando, who had driven superbly all afternoon, as he's driven superbly every race-day afternoon for the past two-and-a-half years. But, after so much toil and heartache, even that single point would have felt like a victory.

"And then came yet another gut-wrenching failure... It's difficult to find the right words to express our disappointment, our frustration and, yes, our sadness. So I'll say only this: it's simply, and absolutely, not good enough."

However, in the wake of yesterday's qualifying session, his cars 10 mph off the pace in the speed-trap and his drivers having picked up 75 grid-place penalties between them, Boullier admitted:" I am racer, so I think this is the most painful weekend I have ever had.

"This afternoon's result was particularly disappointing," he continued, "we always knew that we'd be towards the back due to the engine penalties both drivers have taken this weekend, but it's never satisfying to be right at the back of the grid."

Despite the doom and gloom however, and a mark of the grim determination that has singled out the Woking team over the last couple of years, he insisted that all is not entirely lost.

"Our focus has primarily been on developing a car for the race," he said. "While we wanted to go out and put on a decent performance for everyone this afternoon, we knew that the emphasis was always on tomorrow. We've seen spills and incidents in every session so far this weekend, so we'll be aiming to capitalise on every opportunity to move up through the field. We are still racers, and we'll be giving it everything tomorrow."